Wahl to the rescue – maintenance hack 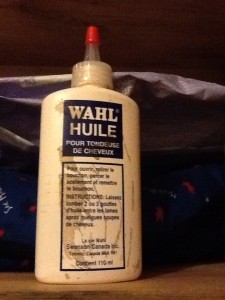 So my Harvest Maid dehydrator wasn’t working so hot – literally, it wasn’t getting as hot as I thought it should. It also hummed loudly. Finally today I clued in that maybe there was a fan in there that wasn’t working.

I took the back off it, and sure enough, there is a fan there humming away – cause it was seized. Also, it is an AC fan (not DC) so a little trickier to replace. I had a DC computer fan on hand which i was thinking about replacing it with. Thing is, it was trying to go, it was just seized a bit in one particular position of rotation, the rest of the way it would go and the motor would push it.

Then it occurred to me, maybe I can try lubricating the bearing in it, see if that is just enough. I figured after so much time sitting, it probably corroded a bit in a particular position.

I went looking for lubricant, I didn’t have WD40 handy and I wasn’t sure it was the best anyways, its not that thick. And of course, engine oil is too thick. Then i thought about my hair buzzer kit, i have a bottle of Wahl clipper lubricant that i drop on my clipper every time I use it. Its specifically made for small metal parts so i dropped a few drops of that on the back side of the fan.

Sure enough, that was just enough to get it going. When I turned on the Harvest Made, it spun up and then the humid air started piling out of it like it was supposed to be doing the last 4 days I’ve had it running. What was taking days to dry my apple slices should now take only hours – as originally intended!

So happy to have it working correctly and that i was curious enough to go figure it out and fix it without having to buy a new fan or new dehydrator!

I’m sure there are a ton of other uses for hair clipper lubricant, its lighter weight than most of the lubes you have in your shed that aren’t WD40 and thicker than WD40 which is good cause it doesn’t evaporate as quick. Its the perfect lubricant for household type requirements.

There ya go, hope this helps the next guy with a seized AC fan!