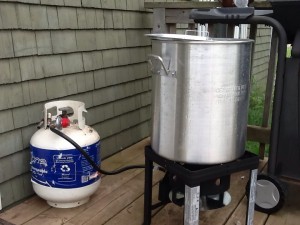 Here is my video of boiling potatoes for pigs. My friend and I were desperately looking for free ood solutions. Households waste SO much food which could be slop for pigs. Every household could probably produce a half pound of slop a day at least, Thats over 180 pounds of food that goes to waste or goes into the green bin for the city to sell back to you as compost. Why throw that away?

even worse is the amount of excellent food left in the farm field after harvest. Granted, things like taters and carrots would just compost in the field and support the next crop on that field but that being said, there is a large amount of food that you CAN get from farms that is totally free. MOstly all you have to do is go collect it. 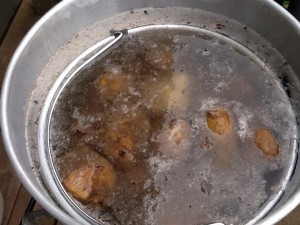 For potatoes, we found a potatoe sorting company in the east of the Island giving away last years cull potatoes. Those are potatoes that didn’t make the grade. They are cut in half or misshapen, or they just don’t look quite nice enough for the dinner plate. Usually these go to processing plants which render them into other products but there are times and seasons when that isn’t happening and you can then get unlimited amounts of potatoes. My friend and I (both have hogs) picked up 1700 pounds of potatoes for our pigs.

I’ve also heard word of cull carrots and various waste greens (carrot tops and such) that may be available as long as you’re willing to pick it up. Hey. I’m willing, for free food!  Most of this food is totally editable and ready for the kitchen table too! So its something that I would eat even, its not some disgusting slop that you may think of when picking up free food.

Now my pigs didn’t like raw potatoes, I tried that first. Even mixed with match which acted like a seasoning for them, they didn’t like them. I’ve read various things, some state that pigs know raw potatoes can upset their stomachs. Also they are harder to eat. Boiled potatoes though apparently provide more nutritional value, taste better to the pigs and are easier to eat since they are soft. And my hogs love it, and will only grow more used to them. Right now its probably 1 half of their diet I’m guessing.

Heres what I did:

got a propane cooker and a huge pot with lift out sieve. Boiled them until soft – just as if cooking for the kitchen table. Pulled them out and let them cool on the lawn. Hosed them off with cool water, then dumped them into 4 gallon food grade containers, and filled around them with water, and then salted them down. A table spoon of salt or so. The attempt was a brine solution but.. its not really enough salt for that.

I have no idea how long these containers will last, they will easily eat 1 four gallon container a day plus mash, whatever amount they eat there. They are simply stored in a cool location with sealed lids of course. Its definitely not considered canning. I doubt they will last much longer than a week but we shall see.

How do you cook taters for pigs? Add anything for flavour? Interested to hear what others do and have done. There isn’t a lot on the inter webs right now as I looked so please do comment.

One recipe for finishing a pig which i heard from the same guy who gave us the taters was to boil potatoes with brown sugar, feed that to the pigs for the last couple weeks prior to slaughter to really sweeten up the meat! Good idea!