I was working away in the chicken shed tonight, making good use of my solar power down there late into the night. Had the lights on for an hour or so while I mucked out the last of the layer bedding. At the end of it the batteries shows 12.6 volts. Thats 100% charge! They started at 12.7 so that is pretty good. Sure my light is only 12.5 watts, so with the inverter I maybe used 15 watt hours but hey, its free energy basically. The hardware is expensive but once that is paid for, you’re literally just turning on sunlight at night for free.

It really is the way to go, and I’m sold on solar power (as opposed to wind and such). Solar power is collected day in, day out, rain (especially with MPPT technology) or shine. The key thing is that you aren’t wasteful with that energy. Put to good specific / essential use my little 90 watt system is plenty. No, doesn’t run heat lamps for baby chicks / meat birds but in the end, when we’re spending $800 on chicken feed for 12 weeks to fatten up the meat birds, another 10 bucks in electricity for the first couple weeks isn’t a big deal. So for that application, I don’t even worry about it. 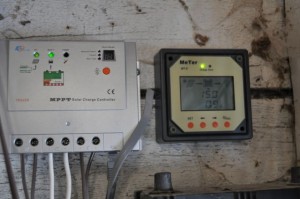 To me, the freedom and thought of power when there is no grid power is the coolest thing.  Right now with my setup, i could probably power a freezer and fridge overnight – until the sun came out, so that would be a cool thing to test out. Figure out the duty cycle of them. i.e. a 300 watt fridge doesn’t constantly consumer 300 watts, it turns on for 5 minutes, cools itself down, then turns off for 20 minutes, or some ration like that. So what is 300 watts, could really only consume 30 watt hours (ten percent duty cycle? maybe thats low) Anyways, i have a 1200 watt inverter now, and a new absorbed glass mat 92 Ah battery so it would be interesting to see what I could do with that in a pinch. We’ll get to test it out while dry camping this year.

Sometimes I feel like the ‘poor person’ who stays poor cause they never have quite enough money to start saving money. By which I’m referring to going all solar here. We could take our house off grid – grid tie at minimum so have zero electricity bills for about 17,000. After 10 years to pay that off, we would have 100% free energy for the next 15 or 20 at least before we needed to start looking at replacing solar panels (which its possible we would even need to do since solar panels pretty much work forever as long as they don’t get smashed). But its such an upfront cost that we’re stuck with our monthly bills month in month out and will in the long run pay thousands more for power because the monthly payments are small and manageable. Its one of those things a ‘rich’ person would do and start saving a pile of money but their already rich so they don’t need to save money 😛    Ah well, i’ll dream about it, and when we want to buy a care again, I’ll say hey, lets just go grid tie. it will be a 30 year investment instead of a 10 year non investment (liability) which a car is.