From Eliminator To a Pure Lead Nautilus AGM

So much for the review on the Eliminator renewable energy battery. I guess I can give you the short story. When I got it, it was 12.03 volts, basically dead. which means at minimum that is 1 full cycle of the battery – you only get a certain number of 100% cycles before the battery is toast so even before I got it, its life was shortened. I also wasn’t happy after 2 days about how much a 100 watt bulb drew the battery down in voltage, i figured it should have hovered a bit higher during draw.. On top of that, the battery sale was closing soon so if I was going to exchange the battery, I figured I’d better do it sooner rather than later.

I didn’t want to take a chance on a bad battery and I couldn’t get ahold of Exide to ask them about their opinion on it. Their websites email form threw ASP errors :/ and I called but no real support line, got someones voicemail..  There were too many questions about it and so, when spending $300 on a battery, i didn’t want so many question marks. 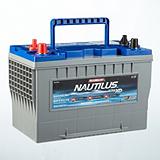 I took it in and replace it with the below, a Nautilus Group 27 Pure Lead Marine / RV Deep cycle battery. It has a few less amp hours, 90 to be exact at the 20 hour rate. The good thing is its the newest technology, apparently twice as good as what I will call the ‘first generation’ AGMs. Not sure if that is true but this AGM technology is the current latest and greatest and they say it lasts twice as long as the ‘regular’ AGMs and 4 times as long as wet celled batteries! This one boasts a number of advantages, for the interested, here is the bullet list:

The telling factor possibly is the warranty. Where the other regular AGM had a warranty for 2 years, this one is for 3. So the likelihood is that the manufacturer actually believes it will last longer than one warrantied for 2 years. Hey, it could be a marketing gimmick for sure, but they would still have to replace it if it went bad so my bet is that this is one of the telling factors on a products quality. This unit was about $20 more expensive than the other ‘renewable energy’ battery as well. The other thing was that this was manufactured in 2014, is THIS year whereas the other one had sat on a shelf for 5 years (2009). Also, this one tested at 12.7 volts at purchase and since its so fresh / new, likely it hadn’t even been charged yet (good). The eliminator I got at 12.03 and who knows if it was being maintained, it probably hadn’t in the last 2 years since it shouldn’t have gotten down to 12 volts in anything less that 2 years.

So I’m much more satisfied with this unit and I do plan on a more lengthy review and discussion on my experience with it. I currently have it hooked up to a PWN solar charge controller (which does the 4 stages of charge, bulk, float, etc) and on 90 watts of solar panels. This is one of the units I plan to put into my off grid camper – my generator on wheels.

I fully expect at least 3 years of no maintenance use out of both this new one and my 115 Ah marine wet celled battery so it will be interesting which one lasts and for how long before i give up on it!