The cost of raising pigs and chickens 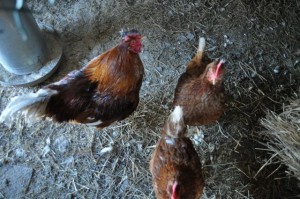 I won’t go into numbers too much but here is the anecdotal type evidences / detail on pigs and chickens and likely other sorts of food animals. Food you raise yourself should be more cost effective, and healthier than its store bought counterpart.

How is that possible if you’re not raising hundreds of animals so that feed costs per animal are cheaper and all that sort of thing?

Lets start with chickens. A bag of feed is about 20 bucks, it lasts for 10 chickens two months or so. Depending on season. Layers, young ones produce almost an egg a day during the summer. So you’re getting more eggs than you can eat with 10 birds (just as a round number). The cost of feed is cheaper than buying that same number of eggs a dozen at a time from a store. It just is, no numbers as I said, thats what I see in my experience. So its not FREE – though technically if you did the work it could be by growing a garden large enough to feed them… The short story is that eggs from your own layers are way more healthy and cheaper than the bottom of the line store bought. And yours are potentially organic, and much healthier due to all the bugs and grass and supplements the chickens are foraging for themselves.

Pigs, it costs a fair bit of money to feed a pig, no doubt, up to 1000 bucks for 2 hogs. Sounds expensive, but in the end, per pound its again cheaper than the premium meats you get at the store and a lot better quality than those premium meats from the store. So cheaper, and better than the best brand at the store.  Per pound, even considering the feed costs, it still ends up being cheaper cause you get a couple hundred pounds of meat out of 2 pigs after 6 months.

So no hormones, no drugs, potentially organic if you want to pay extra for organic feed, they forage for a lot of their food which adds to the quality.

Note that i’m not considering labour. Labour isn’t all that much really but it is a daily thing, twice daily minimum. Labour would increase the cost of the meat .But if you’re a city dweller, you may be paying a gym $100 a month for a gym membership to get exercise. If you consider that and consider the exercise being caring for the animals, fresh air twice daily and other such chores, the meat is even MORE cost effective. The advantages stack up when you start considering those sorts of things.

So the food is cheaper. The food is healthier. The animals are brought up free range, and in a happy environment. The exercise and fresh air is over and above the healthiness of the meat too, and an extra advantage.

And even in the city often you can have a couple chickens in your back yard, whether for eggs or meat.

Considering all this, I really don’t know why everyone doesn’t do it. And this coming from someone who 2 years ago couldn’t be bothered to do it. Now that I am, its a no brainer, everyone should be doing this and we would be a much more free, healthier society and we would be lessening the load on farmers and all of it is more sustainable too.