Land Use And Pallets 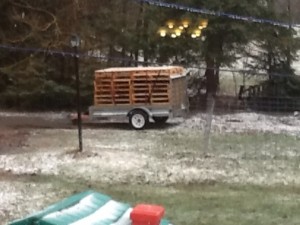 You can see here my trailer full of pallets. About 14 stacked up there from a local shipping company. Free of course. Pallets are great for building things. I’ve used most of mine for building firewood holders and as the base so that the firewood is kept off the ground and supported on both ends so it doesn’t just roll everywhere. Pallets are a great source of firewood in a pinch too and burn REAL hot. These are softwood pallets and the most easy to find but you can get hardwood ones which are 3 times as heavy.

These pallets will be used for more firewood shelter and likely to build the pig house (coop?). I’ll build it as a 4×4 square house which should suffice for a number of months, we will see how big they get. For the price of gas to get them, you can’t beat free building materials!

Onto the land use, we had a visitor over, an environmental officer from the government of PEI. Its not my intention generally to attract attention to things even when I’m pretty sure I’m legal, hey, the less chance there is for complaints the better right?! Anyways ,he came to check out our chicken sheds.

Our sheds and house are REALLY close the river, like 5 feet away and so well within the 15 metre river buffer zone within which you can’t build, and need permits to do pretty much anything. And 50% of our riverside property is swallowed up by buffer zone which makes the land almost useless for anything else since you can’t legally do anything with it in the buffer zone. YOu can’t cut trees, you can’t landscape, you can’t do ANYTHING without a permit and permits are hard to get.

So the officer came over to see if we were legal.  The short story is that our sheds are grandfathered in, we can make use of them because they were built before the laws came into effect (well before, like 50 years before). So we can basically do pretty much whatever we want with the existing shed for chickens, broilers and such due to that grandfather clause. same applies for the house on the property . What we can’t do is build onto the sheds, or otherwise majorly renovate them without permits… such is life when the government is involved in protecting the environment and I can’t complain, I want to protect it to.

Happy to say all was 100% legal what we wanted to use them for and that was a load off!  So our land isn’t useless which could have been the outcome otherwise!

Now the pigs can’t go in the buffer zone but we have enough land to get them down on that property without concern for proximity to the river so thats a good thing too.

My next thought was that I should quickly build some sheds outside the 15metre boundary so that when the laws increase the range, we’ll be grandfathered in there too! Gotta think ahead!

So thats our news for land use. Outside of the buffer zone, we are allowed to do pretty much anything as long as any single animal is less than 300 in population and we would absolutely never go anywhere near that limit as a hobby farm. So thats the news, pigs coming in a couple weeks!

2 thoughts on “Land Use And Pallets”