My experience posting a blog from the BlackBerry Playbook 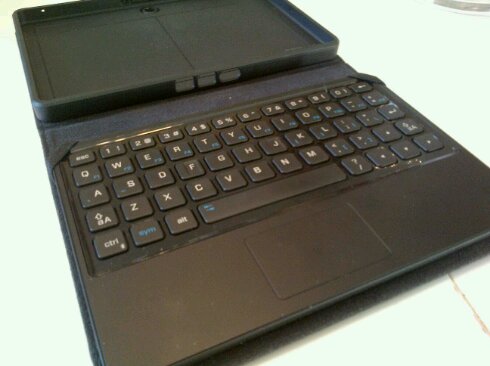 Here is my experience posting from my bb playbook (non LTE). I’m using the bb mini keyboard folio case which is bluetooth. first comment is that the keyboard is tiny. This wordpress app is apparently a converted android app since the bottom android app bar shows (its provides the back button which on android devices is a hard button) . one thing lacking here which possibly is due to the android app is that the system doesn’t consistently auto capitalize after periods which is really handy to have. with the mini keyboard, no word prompts are available either which I like. bb has the auto word guessing feature that shows words as you type and if its the correct word, you can select it without having to type it all in. it actually works really well when its available. maybe a feature only of the onscreen keyboard.. I just tried the onboard actually and for whatever reason in this app it doesn’t provide that feature either. the consistency of keyboards is lacking in bb os 2.x.

Example, when on a password field sometimes the keyboard includes the numbers along the top. other times it seems it doesn’t realize its a password field and just has the letters showing with an extra click for the numbers. but then ios never worked properly for that, you always have to click another button to get the numbers up. One up for RIM on that feature.

In this app, just called wordpress(not in the browser obviously) after entering the title, the body opens full screen which is nice. good implementation of the editing interface as it relates to screen realestate. though most android apps are only created for smartphones with smaller displays. i’d like to see the tablet implementation of this…

What would perfect this experience as always is a full size keyboard whether mini usb or bluetooth. but hey, it works, and as always, in a pinch it gets the job done.