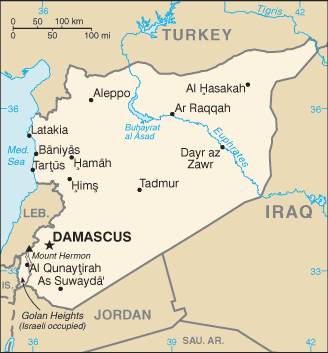 The destruction of Damascus seems to be a slow train wreck before our eyes. Its slowly being bombed by Syrian forces attempting to kill or scare away the rebels (who are being well supported by NATO by way of weapons, and expertise in strategy and warfare). Its not completely destroyed but according to the bible it will be one day. Here is a Joel Rosenburg blog on it with scripture references and all. Joel is very knowledgable and intelligent when it comes to world events and bible prophecy: http://flashtrafficblog.wordpress.com/2012/06/28/does-bible-prophecy-foretell-the-destruction-of-damascus/

We are seemingly SO close to a preemptive strike on Iran due to their nuke weapons and intent on destroying Israel. DOn't believe they want to wipe out Israel? They have been loudly proclaiming that they want to wipe out the 'cancer of the earth', the great and little satans for a long time and a lot more frequently in recent days

From Wikipedia (with all its footnotes):

Mahmoud Ahmadinejad and Israel refers to the relations between Iranian President Mahmoud Ahmadinejad and the State of Israel, characterized by contentious speeches and statements, including calls to “eliminate the Zionist regime” (Israel).[1] Ahmadinejad has questioned the existence of the Holocaust, took part in a protest called “World Without Zionism” and has derided Israel on numerous occasions.[weasel words] He has urged regional powers to cut ties with Israel and halt oil sales. Tensions have risen over Iran's nuclear program.[2]

And the world economy is near some kind of collapse that would be the perfect event to bring in a new monetary system, cashless maybe?

Now you may not like Glenn Beck and I don't listen to much of his stuff but the stuff I do listen to is at least good to think about, he makes some good points, seemingly details out financial issues with intelligence. This one is less about Obama and more about the US debt, who owns it, how Europe is doing and what would happen if Greece quites the EURO. They (world leaders) have been leaving this stuff sitting for SO long not doing much to really resolve the issue and more people should be aware of how bad the economy is, I don't know how we haven't felt it much here (though food prices and gas are continuing to rise). The US owes 16 trillion now. Almost impossible to pay back especially if China decides to call in their loans now or sometime as an act of war for example. No more guns and blood, you can easily bring down countries finanically! Its a different world we live in.

I encourage everyone to get into world news, to know and understand where the world is related to bible prophecy, world government, financial status as it relates to one world currency and eventually mark of the beast. All signs are moving quickly as shown in bible prophecy.