Why WiiU will resonate with hardcores

As most know, I like video games. I’m probably holding on to my childhood or something but i do enjoy the anticipation of a new console or a new game with amazing visuals or effects, or simply incredible gameplay. I never had consoles when I was a kid, maybe thats why I buy them now?? I got my first console in college (as soon as I was out of the house basically and as soon as a bank would give me a credit card 😉  ..) I got the N64 in Sault St Marie, Ontario. Then I stood in line on launch day for the Gamecube in Lindsay, Ontario. Next I slept overnight in the parking lot in Georgetown (again, Ontario) to effectively win the first of only 3 Wiis’ on launch day to be in the Zellers there.

There is a picture of us here sleeping at the sellers, click to see that blog 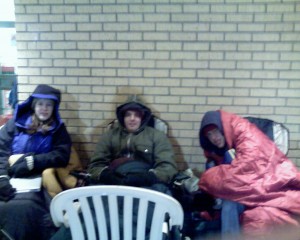 The next console from Nintendo (promising to meet the demand for hardcore gamers) is the WiiU. Nintendo admittedly fell short in selling to the hardcore crowd.

[box type=”info”] Hardcore gamers prefer to take significant time and practice on games, and tend to play more involved games that require larger amounts of time to complete or master. Hardcore gamers may take part in video game culture.[further explanation needed] Competition is another defining characteristic of hardcore gamers, who often compete in organized tournaments, leagues, or ranked play integrated into the game proper, an example of this is Major League Gaming, an Electronic sports organization that often holds events for hardcore First-person shooter games such as Quake. There are many subtypes of hardcore gamers based on the style of game, gameplay preference, hardware platform, and other preferences.[/box]

(link for above, WikiPedia, here)

“Wii was not accepted by core gamers because they did not want to abandon their preferred control approach,” Andriasang quoted him as saying.

“Additionally, Wii did not use HD because HD cost performance at the time was low,” he added.

“Wii U makes it easier to use conventional controls. Also, the Wii U controller is not as big or heavy as it looks.” Link here

I believe with Nintendos realization and the way their headed adds up to a console that will be accepted back by gamers, and not just the FPS gamers which seem to be the standout gamers of this generation on 360 and ps3, I mean the original hardcores who started on sidescrollers and 8 or 16 bit graphics.

Here are a few reasons I think Nintendo will get the hardcores back, and by that I mean the original hardcores (us 30 or 40 year olds):

I think Nintendo could do it this time, they made millions upon millions of dollars with the Wii, and that was without hardcores, I’m hoping they will do all that over again WITH the hardcores included!
Stay tuned for E3, June 5th to 7th I believe!