With the birth of our second child I’ve had the opportunity to attempt again to use the iPad as a workstation, albeit for some real basic tasks. Its served as our primary internet access in the hospital, via 3G (so glad that I got 3G. there are many different occasions when 3G is handy. Great for a phone call in a pinch when we don’t have our pay-as-you-go cellphone, or to look up an address, store ours, or phone numbers on the go. Also handy obviously anywhere there isn’t Wifi or where the Wifi happens to be down).

The hospital here doesn’t have any publicly accessible Wifi and without Internet, well.. I don’t know what we would do. Great for posting quick pics of the new baby and shooting out emails here and there and then generally wasting time surfing the web.

In being forced to use it for ‘real’ work I’ve been able to make it work for the most part. I was able to send out an invoice to a client for example although I had to get an app to do it. My WordPress install has an invoice plugin that I use now (WP Invoices) and from it you generate the invoice, and either email, or save as PDF. Saving as PDF works great on the macbook because Safari has the built in ‘print to PDF’ functionality. However Safari on iPad does not. So, wordpress now works great on iPad, but the PDF side of things doesn’t so I had to download an app for that – Web to PDF its called. It allows you to surf to a website and save the HTML page as a PDF, so I take the invoice URL, paste it in the app and save it out as PDF. A couple of extra steps but it got the job done. I would guess that baking PDF export into iPad would be coming shortly, at min a more streamlined way to do it. So that was one task, fairly straight forward but had to find a way to do it on iPad. Its workable.

I’ve also had to setup some google apps calendars for our church, namely a nursery schedule. All of which I know how to do on the macbook of course with the full desktop version of the googe apps pages. However on the iPad, the desktop interface doesn’t work 100%. It works about 95% and really there are some tricks to it, like holding down a section for an extra second to get it to register where the use of java or ajax is, as those code blocks don’t work the best on a touch interface. This could and likely is just Safari on ipad and the way its rendering it but still, it takes some doing, some fine touching. Granted, most of this is not iPads fault but the lack of a mobile interface from Google that has the functionality of the desktop one. THe mobile interface is really VERY limited in terms of configuring and adding lots of items. Plus google just defaults to mobile on the iPad which is too bad cause like I say, the desktop is much more usable (when the interface is working). All in all, I was able to get stuff done but it definitely takes a little getting used to and a little longer to complete tasks. (Google needs a dedicated google apps APP for the management of the interfaces there. And I’m really surprised there isn’t one since they have google search app and other things which really are limited in their usefulness.

The third item is the direct uploading of images from our Nikon D90. I have the camera connection kit which accepts SD cards. With the lack of the macbook I’m still able to upload the images and movies, do some minor editing (more is possible with the new iPHoto which I haven’t gotten yet) and more importantly do something with them. We emailed a few, posted a few to blogs etc. THe options there are totally sufficient for what we need and the play back of the images and video is obviously a way nicer option. 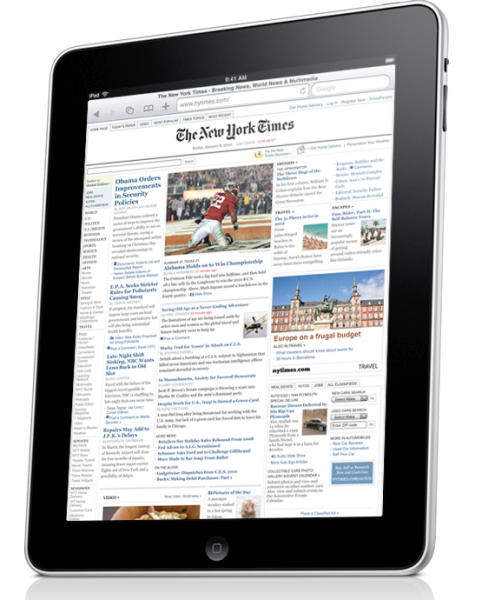 Web browsing is just webbrowsing, always works well assuming there isn’t some crazy imcompatible code on the site or flash. Most sites now provide mobile versions or have been updated to play nicely with the iPad.

All in all I got some work done, maybe not as quickly, however maybe more quickly next time now that I have some apps to help like the Web to PDF app.

One thing I didn’t mention is the bluetooth keyboard I’m using now, definitely a requirement for any REAL typing although for my tasks, other then blogging, I haven’t used the Bluetooth keyboard.

I really like iPad and its really maturing as a platform with just about any app you can imagine (including my coffee roasting app).

I’m thinking I could stop using my macbook for the majority of day to day tasks. Loving it though, totally mobile workstation, super handy on vacations or when having children and staying in the hospital!

2 thoughts on “The iPad Office”