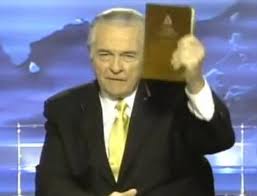 I have a Jack Van Impe prophecy bible, if you’ve never heard of it or him, its a bible produced by Jack Van Impe which attempts to highlight all the significant prophetic scriptures through the pages of Holy writ. (just wanted to use ‘writ’ in a blog 😉

writ 1 (rt) n. 1. Law A written order issued by a court, commanding the party to whom it is addressed to perform or cease performing a specified act. 2. Writings: holy writ. http://www.thefreedictionary.com/writ

I’ve definitely got into opening my REAL bible and actually fine it refreshing to read the KJV again as there are potentially more interesting insights. I find it has interesting historical truths, for example how they label animals like I blogged about (unicorn, search my site for this blog based on that keyword). It provides insight into what they believe when this version was created (the time of King James)

The Authorized Version, commonly known as the King James Version, King James Bible or KJV, is an Englishtranslation of the Christian Bible by the Church of England begun in 1604 and completed in 1611.[3] First printed by theKing’s PrinterRobert Barker,[4][5] this was the third official translation into English; the first having been the Great Biblecommissioned by the Church of England in the reign of King Henry VIII, and the second was the Bishop’s Bible of 1568.[6] In January 1604, King James I of England convened the Hampton Court Conference where a new English version was conceived in response to the perceived problems of the earlier translations as detected by the Puritans,[7] a faction within the Church of England.[8]

James gave the translators instructions intended to guarantee that the new version would conform to the ecclesiologyand reflect the episcopal structure of the Church of England and its beliefs about an ordained clergy.[9] The translation was done by 47 scholars, all of whom were members of the Church of England.[10] In common with most other translations of the period, the New Testament was translated from Greek, the Old Testament was translated from Hebrewtext, while the Apocrypha were translated from the Greek and Latin. In the Book of Common Prayer (1662), the text of the Authorized Version replaced the text of the Great Bible – for Epistle and Gospel readings – and as such was authorized by Act of Parliament.[11] By the first half of the 18th century, the Authorized Version was effectively unchallenged as the English translation used in Anglican and Protestant churches. Over the course of the 18th century, the Authorized Version supplanted the Latin Vulgate as the standard version of scripture for English speaking scholars. (http://en.wikipedia.org/wiki/Authorized_King_James_Version)

Its interesting how ‘modern’ translations always have some kind of a bias related to the era the version was created in. This is due to the state of theology at the time, but also it reflects things like science at the time and other common though and beliefs. Example, if a particular excerpt of the bible is thought to be better understood due to scientific findings at the time of writing, one might use different words to describe a particular passage describing or translating that passage using modern definitions or objects or descriptions. I’m no expert here, I’m sure a theological major like Lindsey (my wife) could detail, sufficed to say, knowing there is a bias is the first step towards be objective. Since no one can be 100% objective, if you also don’t recognize your bias or the bias of earthly translators, you’re probably going to be WAY off the original meaning of the text.

The ability these days to compare and contrast (as Bruxy Cavey likes to say) is incredible, surf to biblegateway.com or blueletterbible.org and you can pull up versions in parallel to read the two verses side by side. And these days there are tons of digital versions to compare, from the original greek and hebrew writings to the more modern KJV to the contemporary NLT, Message formats.

Putting versions side by side caused me to see the whole thing about the unicorn being used to describe an animal in the bible whereas the newer versions simply called the animal by modern names like Ox, most likely because the author figured that was the closest thing we have around today that is close to the description. Anyways, sufficed to say, its good practise I’m finding to have several versions around to provide insight into the true meaning and significance of the text.

To get back on the prophecy bible subject, if you’re interested in bible prophecy this actually makes a great resource as it provides detail on text that you probably didn’t think had any significance to bible prophecy. And there are TONS of scripture that relate from last days things, to second coming, to rapture references. Great stuff!