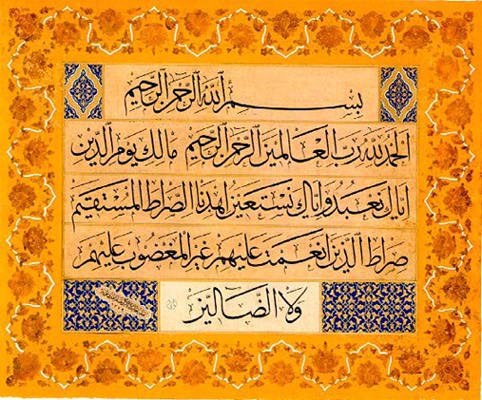 Since Christianity and Islam are the 2 largest religions (where Christians are still leading as the largest by adherents), I thought I would step outside the Christian bubble and see what Islam is. That is, apart from what Christians say.

Here is a quick run down of the similarities / differences, now not sure who the author of this was, regardless, it looks pretty even keeled:
http://www.religionfacts.com/christianity/charts/christianity_islam.htmThe below is just a subsection of the items on the link:

First column is the comparison item, second is Christianity, 3rd is Islam


The main difference here? Well, a number like the trinity of God vs one God in Islam. But overall, where it DEFINITELY counts is how to gain favour or go to heaven in the after life. Cause thats where we are all interested right? So the biggest differents looks to be the distinction of works vs faith for access to heaven/paradise (Muslims call it paradise).

What are the implications of this? It means either its all on your own hard work to get to heaven OR its not based on anything you do particularly, but rather the free gift of salvation from God through Jesus death on the cross. If its based on works, isn’t it YOU who gets yourself to heaven? What do you need Allah for at that point other then to create the paradise? That idea I suppose leads to man trying hard and through different methods to get to heaven. Note that martyrdom is apparently the ONE way to ensure you get to heaven, hence the suicide bombers and such. Christianity in contrast gives the idea that our bodies are temples of the Holy Spirit so to go and destroy it for any reason basically means disrespecting the creator. Islmaic belief is that Allah is the creator, just like the Christian God, so you would think they too would respect the body and not kill themselves. But maybe I”m ahead of myself, need to read more.

As always, Wikipedia has some great info: http://en.wikipedia.org/wiki/Christianity_and_Islam

A large sticking point is whether Jesus died on the Cross. This is KEY, Christianity and acceptance into heaven is based on a faith that accepts that Jesus died for our sins on the cross. God is Holy and cannot be around unholiness, we are full of unholiness so we need a saviour to take out sins, to make us pure in Gods sight so we can be with Him in eternity forever. If Jesus never died on the cross, he never paid for our sins, so we would never be able to be with a holy God in heaven if Jesus did not die. In Islam Jesus never died but was taken up to God. So can the Allah of Islam be around unholy, unpure people? Thats the suggestion, because no matter how you live, how many good works you do on earth, every christian and every islam follower and all the rest of the people in the world have sinned at LEAST once, and I’m sure millions of times even in a lifetime. So Allah is able to dwell with sin, or Allah isn’t sinless or holy??? I don’t have the answer for that one and thats probably the big place where Islam doesn’t make a lot of sense. See below from Wikipedia:

“Islam and Christianity differ in their fundamental views in regard to the crucifixion and resurrection. Christians believe that Jesus was condemned to death by the Sanhedrin and theRoman prefect Pontius Pilate, physically crucified and resurrected. Muslims believe that Jesus was condemned to crucifixion and then miraculously saved:

That they (the Children of Israel) rejected Faith; that they uttered against Mary a grave false charge;
That they said (in boast), “We killed Christ Jesus the son of Mary, the Messenger of God“;- but they killed him not, nor crucified him, but so it was made to appear to them, and those who differ therein are full of doubts, with no (certain) knowledge, but only conjecture to follow, for of a surety they killed him not:-
Nay, Allah raised him up unto Himself; and God is Exalted in Power, Wise;-


And an interesting comparison on the ‘prophets’ as Islam calls them:http://www.thereligionofpeace.com/Pages/Jesus-Muhammad.htm

And that above list alone is telling and an interesting perspective. Am I incorrect in anything here? Please educate me if I’ve found anything incorrect. I think a frank discussion here is key to providing either a reason for their faith or a reason to take a second look at who / what they believe, for me as well as a born again Christian. I think we are all the seek out the truth.

And another topic which I’ll save for another blog is the comparison of prophecy between Islam and Christianity, ie the Bible. That is a massive study and fascinating on the differences there. Again, really telling!