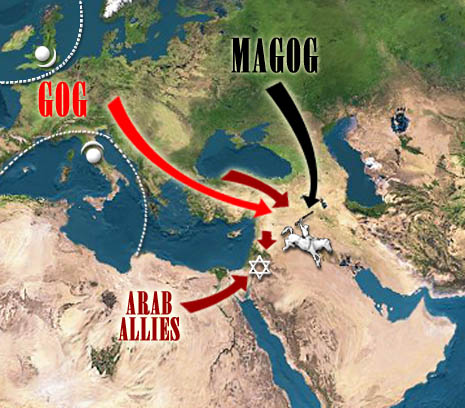 Things are heating up in the middle east and europe. The economic meltdown is prompting Merkel and Sarkozy to consider a re-imagined EU that has strong central powers for economic policy. They are wanting to switch it from what it is now, more or less a loose collection of countries struggling under debt and some using the EURO as their fiat money, to a super state controlling the economy more directly. This means countries involved would need to agree to losing more sovereignty and they are almost all willing to now that the economy is so bad, no one has jobs etc. The EU sees that the time is right to make a grab for greater powers saying that its the only way the economy can be fixed. And they mean that they will be able to keep the economy afloat for another period of time, sure, but they aren’t really going to fix it. Fixing it would mean a LOT less luxuries, higher taxes, lower salaries, and effectively forcing everyone to live within their means which is a far cry from what they are doing now.
http://euobserver.com/19/114547

The Franco-German powerhouse at the heart of the EU has proposed a series of sweeping changes to the bloc’s institutional set-up in an effort to bring an end to the eurozone crisis that has laid low European economies and threatened the survival of the Union. German Chancellor Angela Merkel and French President Nicolas Sarkosy in a joint letter to EU Council President Herman van Rompuy delivered on the details of what they agreed last week must be altered in the eurozone

Also, the big nations are shaping up and taking obvious sides. Russia taking Syrias side (hooked by their jaws biblically?) and giving syria weapons overtly now and promising to support them against any NATO intervention
http://www.upi.com/Top_News/Special/2011/12/05/Russia-sends-ship-killer-missiles-to-Syria/UPI-77361323106694/
And China has come out and said straight up they would back Iran even if it means World Was III
http://www.infowars.com/chinese-professor-threatens-third-world-war-to-protect-iran/
(btw, if you don’t like my sources, google the topics, there are hundreds of stories from all sorts of news outlets on this stuff. This is on the national news casts too most of it. If you aren’t aware this is happening, you really should start reading the world news 😉 )

Also, Israel has said repeatedly for years that it will not allow Iran to become a nuclear weapon power (nuclear energy is one thing but weapons is another as it would only take about 3 to blanket Israel and make it a wasteland)

Biblically we know Israel will not be destroyed as God will step in in the last minute and destroy the king of the north. It means that countries like China and Russia, when they get fed up by NATO or are called down to help by Syria or Iran against lonely tiny Israel, God will supernaturally act.

Get out your bible and read Ezekiel 38. This is the war with the armies from the north that go against Israel. I’m cutting and pasting some telling verses. This war hasn’t happened yet and Israel  certainly isn’t unwalled. Maybe they rid themselves of the Iranian threat and the world considers peace in the area for a while?

7 “‘Get ready; be prepared, you and all the hordes gathered about you, and take command of them. 8 After many days you will be called to arms. In future years you will invade a land that has recovered from war, whose people were gathered from many nations to the mountains of Israel, which had long been desolate. They had been brought out from the nations, and now all of them live in safety. 9 You and all your troops and the many nations with you will go up, advancing like a storm; you will be like a cloud covering the land.
14 “Therefore, son of man, prophesy and say to Gog: ‘This is what the Sovereign LORD says: In that day, when my people Israel are living in safety, will you not take notice of it? 15 You will come from your place in the far north, you and many nations with you, all of them riding on horses, a great horde, a mighty army. 16 You will advance against my people Israel like a cloud that covers the land. In days to come, Gog, I will bring you against my land, so that the nations may know me when I am proved holy through you before their eyes.
17 “‘This is what the Sovereign LORD says: You are the one I spoke of in former days by my servants the prophets of Israel. At that time they prophesied for years that I would bring you against them. 18 This is what will happen in that day: When Gog attacks the land of Israel, my hot anger will be aroused, declares the Sovereign LORD. 19 In my zeal and fiery wrath I declare that at that time there shall be a great earthquake in the land of Israel. 20 The fish in the sea, the birds in the sky, the beasts of the field, every creature that moves along the ground, and all the people on the face of the earth will tremble at my presence. The mountains will be overturned, the cliffs will crumble and every wall will fall to the ground. 21 I will summon a sword against Gog on all my mountains, declares the Sovereign LORD. Every man’s sword will be against his brother. 22 I will execute judgment on him with plague and bloodshed; I will pour down torrents of rain, hailstones and burning sulfur on him and on his troops and on the many nations with him. 23 And so I will show my greatness and my holiness, and I will make myself known in the sight of many nations. Then they will know that I am the LORD.’

So this prophecy hasn’t been fulfilled, Israel isn’t quite living peacefully in the land. What will create that peace? Will a world ruler come in and ‘create’ it / force it? Will Israel defeat her last big threatening enemy and then think there is peace while the Arab countries and northern countries stew about the loss? So many scenarios could come to pass.  Suffice to say, if you’re watching the news, you’re watching the bible unfold. We are living in BIBLICAL times, probably even more exciting biblically speaking then the days of Noah, or if you were there when Jesus walked on the earth. These are the times of the wrap up of the bible, the books of Daniel, Ezekiel, Joel, Luke, Revelation and so many others speak of things, BIG things happening in the day and age we are in  now. The 7th day biblically or in the very last few seconds of the 6th day for sure. God only knows the time when these things will start.

Incredible time to be alive! The bible is living and breathing and more telling then the morning newspaper!