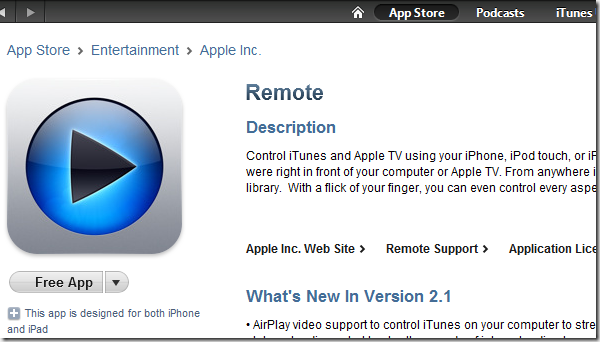 My quest last week was to look for software with which one could stream music FROM the iPad to a Windows PC running XP. Long story but there is no Apple encouraged method for that. There are some methods using Win 7 and its own media software, I think using DNLA or whatever its called.

And you would be surprised at the lack too, there are TONS of apps for streaming from cloud services or from your pc or Mac TO you iPad but from iPad to devices, unless its an apple device compatible with airplay, you’re basically out of luck.

The first solution was airmusic. You install it on your pc, shows up as an airplay device to the iPad and you can stream video / audio. Thats if it works Didn’t work very well for me, kept crashing. It requires Quicktime, and Bonjour to be installed.

Second I found just for audio was Shairport4w. It requires bonjour running. No crashing here, its bare bones, basically runs as a service in your tray. iPad sees it as an airplay device too. It works kinda, what I found was that after 30 seconds or so, the audio started breaking up. Not sure if its the wifi thats not ideal for it, I don’t know how Apples solution does it, it must cache it on the other side so if the signal drops for a second, it doesn’t completely get choppy. Sad there 🙁

So what did I do? Well, I fell back on an Apple solution. They put out the app called ‘Remote’. Basically it lets you control the itunes software (using Home Sharing with YOUR itunes email login). So it means the ipad doesn’t have to stream anything, just turn things on and off, adjust the volume and such. So not as flexible at say, the church where the sound system may not be totally accessible to you for loading music on the PC there or whatever they have. In my case I was able to load all the music on the church PC so remote just connected to it (after I logged in and used up one of my 5 itunes authorizations – you get to authorize 5 computers with your itunes account, thats the limit)

So not a perfect solution and in the end I had to use Apples authorized method anyways :/ Oh well.

For this specific remote control application, this worked, i’ll likely have other requirements and will have to find other solutions next time.

like I’ve said before, I hope this helps someone out there!