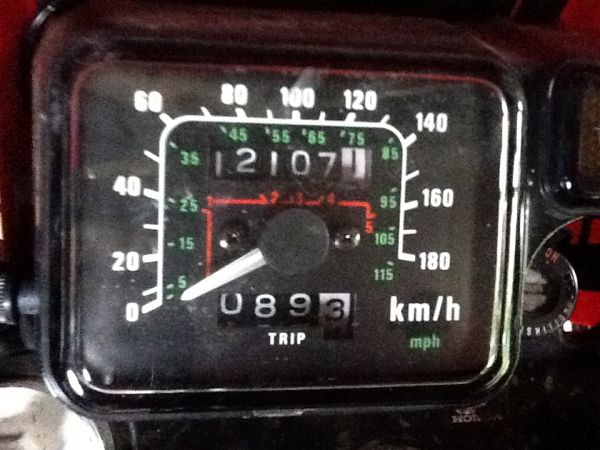 My bike turned 12,000. Thats how many kilometers I’ve rode on it anyways. I have no idea how I got that many, since much of my driving has been offroad. I guess we’ve driven a LOT off road 😛 I’ve only really had it on the road for a couple years in all, street legal and licensed that is. So HAPPY 12,000 KMs to my bike!

Here is another picture of ‘my precious’. Ages well doesn’t she? Only the second rear tire on it. Took a while to wear out the stock knobs. The front is still stock, likely in the next year or two that will need to be replace. Bearings were replaced front and back this year since the bike inspector required it. I didn’t complain, likely time for them after all that bike has been through :P. I’ve replaced clutch levers, brake levers, lights, bulbs, and then all the regular stuff. Have a K&N air filter in there. The bike has stood up super well, I’m totally impressed. There aren’t too many plastic pieces left on it that aren’t cracked or broken in some shape or form. 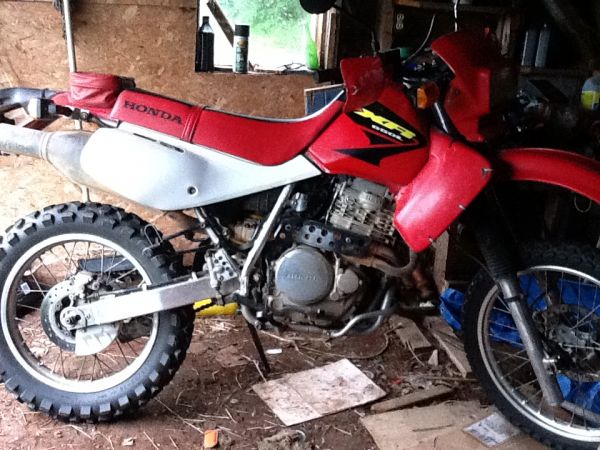 In celebration of passing 12,000 (note the thinly veiled excuse there) I learned how to wheelie the bike (on purpose and not just by mistake 😛 ). Spend 40 minutes out riding yesterday practicing my clutch wheelies. Thats where you stick it in first gear, get up to 10 or 15 KPH, slip the clutch a tad, rev it up and pop it. Does a REALLY nice job of popping the front end up, at which point you can shift into 2nd or do whatever. I haven’t mastered the continuous wheelie – AKA, the catwalk (as its named in the BMX world). Thats next on the list. I’ve always seen guys on superbikes flying down the 401 and like nothing pop up the front end and just stand it all the way going 120, and I’ve always wanted to do that myself. I think its one of the coolest tricks, really impressive. So, I says, nothin to it but to do it.

I’ll have to get LIndsey to video tape me doing it so I can have hard evidence :D. Just like they say on social blog sites, ‘Pics or it didn’t happen’.