I grabbed the spigots Dad delivered when he came over – I think that was when he was over with a load for us.. or maybe we grabbed it when we were down there…  Anyways, I went out today and found a nice big auger bit and put a couple holes into our (what we think is a) Manitoba Maple. Checked it tonight and I brought in our first litre of sap.

Over the next few days with the temp going up and down, I figure we should have a LOT of sap to boil down, all from one big old tree too.

It doesn’t look like its been tapped before either but I could be wrong. I also have NO idea how the syrup will turn out. I’m guessing it will have a distinct taste to it. Can’t complain though for it being free. God is genius isn’t He!!?? Free food, you just need to poke a hole in a maple tree!

Sadly, we have no other maple trees on the property but I’m interested to see how much I get out of this one. It could stand to lose a few pounds and branches anyways as its almost out of control for growth. I’ve trimmed it back with a chainsaw on a couple of sides and its sprouting runners all the time (or whatever you call them, shoots?)

Thanks for helping us all get interested in this stuff and letting us learn and wreck spigots and make the ceiling all sticky every spring from boiling sap. 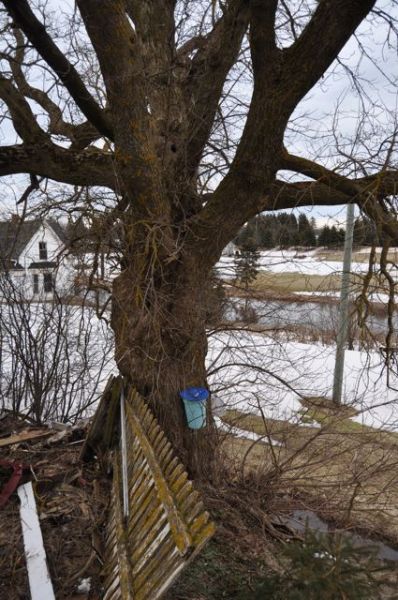