Support from the Simpsons 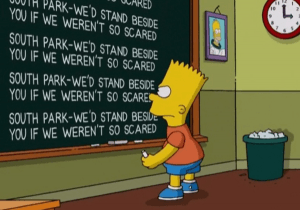 The Simpsons here were supporting the South Park guys for their comic depiction of the “prophet” Mohammed. I love guys who stand out like this but most of us would rather NOT get into something like this, if for no other reason then to not receive death threats. As a Christian, one who follows Christ (the best he can), I don’t think we should agitate people in other religions on purpose, though at the same time I value freedom of religion and speech. Also, there are laws about uttering death threats and I think our laws should definitely apply here and prosecute those who uttered such death threats. The people of Islam have every right to disagree and dislike this sort of thing and they can certainly protest, send letters and emails and campaign – if they are a citizen of this country or the US, that is their right (something which they may not be legally allowed to do in MANY other countries, dare I say most other predominantly Islamic countries. I know there are cases of countries where they can speak freely but I think most are dictatorships?) Anyways, people who utter death threats should definitely be subject to the laws. The same would go for a Christian protesting the blaspheming of Christ, he or she should not disobey the laws of the land (assuming the laws of the land do not overtly contradict the bible), but said Christian can protest, send letters etc. We are to live peaceably with all man as far as we are able. I don’t think God wants us provoking other religions or beliefs, rather He wants us to demonstrate  the peace from the almighty God in heaven, that those people of other religions might see it and recognize Jesus Christ as the one and true God

So I support these guys if only because most others are just scared to stand up here and fight for the laws our forefathers fought for. If we like the way things are now, we need to stand up, not be afraid of death and fight for God and for what we believe in.

All that being said, things like this do point us to the fact that the bible does have good things to say and does have prophetic implications, prophecy is upon us and this is where the world will be going before Jesus returns.

Note, I don’t like south park, its pretty vulgar and crass regardless of subject so I vote by not watching it but at least they are standing up and exercising their free speech and forcing us to bring this up in conversation.

Also, we as Christians should not be scared as we have the blessed hope, God will conquer in the end, He will reign, He will rule and He will make all things right again.