Power Consumption – A review of our usage.

I was crunching numbers on our house, trying to figure out where all our money was going. Granted our electricity isn’t TOO bad per month, average bill $70. However, we’re pondering whether to go with geothermal for heating / hot water. With Geothermal is the fact that electricity will double basically as the heat pump runs off electricity, and usually you need to supplement your hot water with an electric hot water tank. 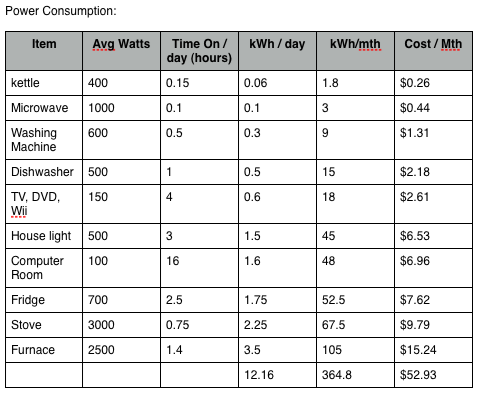 As you can see, many things like the dishwasher don’t seem like much (its run every day basically), but things like the lights in the house do start adding significantly to the overall usage. The furnace is huge too, at 15 bucks, considering that you ALSO have to pay 2500 – 3000 a year for heating oil 🙁 (This amount is ZERO with geothermal).

Another cool thing is that if you have running water (in the form of a stream or river) you can VERY easily create a hydro electric turbine quite easily from an old car alternator and a pelton wheel and some piping. They will not break a sweat producing 600 watts all day long, 24 hours a day. This adds up to 14.4 kWh. The chart above shows that we’re using 12.16 kWh a day so one hydro turbine would power our entire house, electric range and all. Add to that some solar PC, hot water, and wind generation and you are good to go. In fact, if you do have a good water source like that, you probably don’t even need the extra sources as water turbines are the most efficient all year around assuming it doesn’t freeze over in the winter.

So some thoughts on energy in and around our home. As suggested on an earlier post by Matt, the best way to do all this is to conserve as much energy as possible. Seal cracks, prevent drafts, keep lights turned off if at all possible, dial down your thermostat at night (which I would do if our landlord would let us put programmable thermostats in 🙁 ).