The first REAL experience off grid 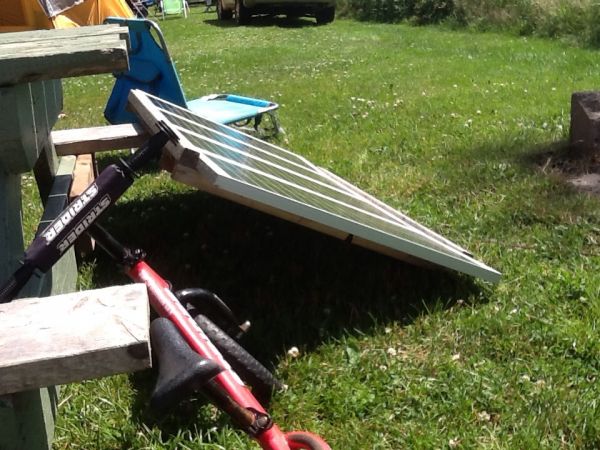 Being the first opportunity to try out my panels and cooler full time for three days (so far) I can evaluate how well they worked.

First my setup and what I use

So those are the things we used while camping. When the sun is out, powering it all is no trouble though I continuously point my panels into the sun. Max amperage is about 9 amps out of my 120 watts. That's about 108 watts to charge my battery. Now if my cooler is running, it's consuming 50 of that 24/7… There is no such thing as a duty cycle on these mobicool things ( you may know it as a coolatron as well). These aren't compressor fridges or coolers but thermal transfer via fluid/ heat exchanger thingers. Not the most efficient but no moving parts which is nice.

I create a duty cycle by turning it off so the batteries can get a bit more juice for an hour at. A time. Nights I've been shutting it off. It drained my battery nearly the one night while testing it, though it did power it all night (90 amp hour deep cycle).

120 watts of power isn't ideal for charging and powering the cooler at the same time. Hit go the cooler sucking 4 amps steady itself, there is only then another 4 or 5 in ideal sunlight to charge the. Battery, which if its been drained the night before just won't work. 200 watts of solar would be my goal, 300 to keep it all going even during cloudy days to offset the lack of bright sun.

I've learned some key things with this trip about actually living off the grid, and refrigeration is one of them, ie it takes a good amount of juice to keep things cold day in, day out without a good amount of solar panels. Sunny week long vacations are no problem. Longer than that and you definitely experience the limitations.

Next iteration I think would be 2 or 400 watts of solar on the roof of our camper – probably more like 400 since if they are flat they won't be pulling in as much as they could throughout the day.

Key with solar is to well overestimate your needs. When night falls or clouds come for more than a day the extra panels are then worth every penny.

I would put flexible panels and glue them right onto the roof of the camper. Right now with my separate panel, I have to pull. It out of the camper each time, set it up, plug it in. With it on the he roof permanently, I could just have it plugged in all the time so even while moving from site to site, it would be collecting solar on the road!

The second part to our off grid experience is the fresh water tank – yes I got it working, the hand pump and all. Sanitized it with some bleach, rinsed it out a number of times. One full tank lasted us 3 days anyways. Coffee twice a day, washing dishes, spaghetti, drinking water … It does. End up being a lot of water but it's done well and means we can easily live without water hookups for a week. It worked really well.

One thing that would be a luxury would be a composting toilet, since. Having to go pee in the middle of the night is a pain since you have to get your shoes on and walk to the campground washrooms… But not enough room for that in your 15 footer. Such is life 🙂

Good learning, good fun and now I know just a little bit more about our consumption and what my offgrid system can support.

2 thoughts on “The first REAL experience off grid”