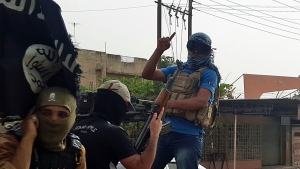 ISIS as you’ve likely heard in the news is the militia group / army that has taken over large parts of Syria and Iraq. Their stated goal is a caliphate (which they have declared) and they are looking to conquer Jerusalem!

The Islamic State of Iraq and the Levant (alternatively translated as Islamic State of Iraq and Syria and Islamic State of Iraq and al-Sham) (Arabic: الدولة الاسلامية في العراق والشام‎ al-Dawlah al-Islāmīyah fī al-ʻIrāq wa-al-Shām), abbreviated ISIL, ISIS, or from its Arabic acronym as DĀʻiSh or DAISH (Arabic: داعش‎ Dāʻish), now called the Islamic State (IS)[1][7][38] (Arabic: الدولة الإسلامية‎ al-Dawlah al-Islāmīyah), is an unrecognized state and active jihadist militant group in Iraq and Syria. In its self-proclaimed status as Caliphate, it claims religious authority over all Muslims and aspires to bring much of the Muslim-inhabited regions of the world under its direct political control,[2] beginning with nearby territory in the Levant region, which includes Jordan, Israel, Palestine, Lebanon, Kuwait, Cyprus, and an area in southern Turkey that includes Hatay.[39][40]  http://en.wikipedia.org/wiki/Islamic_State_of_Iraq_and_the_Levant

A caliphate is a world rule of islam:

A caliphate (in Arabic: خلافة‎ khilāfa, meaning “succession”) is an Islamic state led by a supreme religious and political leader known as a caliph – i.e. “successor” – to Muhammad. The succession of Muslim empires that have existed in the Muslim world are usually described as “caliphates”. Conceptually, a caliphate represents asovereign polity (state) of the entire Muslim faithful (the Ummah, i.e. a sovereign nation state) ruled by a single caliph under the Constitution of Medina and Islamic law (sharia).[ci http://en.wikipedia.org/wiki/Caliphate

This is BIG, in islamic eschatology, they say this is to come to pass and this will bring in the 12th imam, the mahdi. Its their version of the saviour who will conquer the world once and for all for Allah and Islam.

The goal of Isis is to restore the Levant:

The Levant (/ləˈvænt/), also known as the Eastern Mediterranean, is a geographic and cultural region consisting of the “eastern Mediterranean littoral between Anatolia and Egypt“.[2] The Levant today consists of the island of Cyprus, Israel, Jordan, Lebanon, Syria, Palestine, and part of southern Turkey (the former Aleppo Vilayet). http://en.wikipedia.org/wiki/Levant

The levant is basically almost exactly all of the promised land that God said Israel would receive (not just where they are now but the WHOLE promised land which includes parts of Egypt, Jordan, Syria and Lebanon).

The leader, Al Bahgdadi has pronounced he is the caliph – the leader of the new caliphate, and that they are marching towards Israel.

After taking Mosul in northern Iraq, they became the wealthiest terrorist group in the world when they overtook a bank and stole 400 million dollars.

What is happening now due to them is that all the armies which have been a bit dormant lately are gearing up. Jordan is mobilizing on its border with Iraq, Israel is mobilizing so ISIS doesn’t overrun Jordan or Israel and Egypt is also mobilizing because ISIS wants to take over all of these.

Watch ISIS which may be the cause of armies to mobilize and congregate in the middle east. Continually more and more armies are setting up in the region – individually to tackle various threats but in the near future they will organize against Israel. ISIS makes for an interesting storyline in the prophetic and seems to be moving prophetic story lines along in ways we couldn’t have imagined.

Bible prophecy WILL come to pass, we just aren’t always sure exactly HOW God has it all planned out.