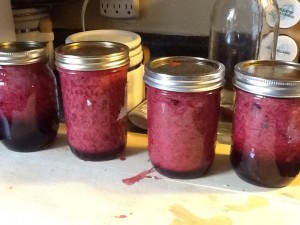 This is a vid of me using my bread machine to make jam. The recipe came right out of the Certo pectin box pamphlet thinger. Its the recipe for strawberry jam which I just used for my mixed berry jam.

We buy frozen berries from the grocery store, the larger bags. The mixed one we get has blueberries, strawberries, raspberries, and blackberries in it (i think thats all).  We should buy during the berry season and freeze our own for sure! Maybe this year we’ll actually get around to going to a U pick place. that would be ideal. This method though isn’t bad and the cost is cheaper than store bought per jar though not a ton – due to the cost of the frozen berries.

The effort in isn’t much. I use the blender to smooth the berries – most kids don’t like big berry chunks anyways and that saves time chopping them by hand.

The recipe is this (my ‘changes’ in brackets because I rarely follow the directions 😛 ): 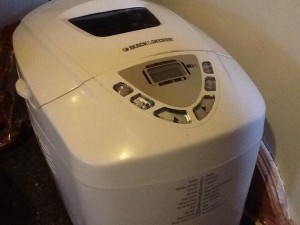 We have all sorts of canning jars, lids, and such from my moms stash and we’ve purchased some new jars as well. Not sure on the success of the jelling yet, but hey for toast, again, kids don’t care if its jelled 100% or not. Coloured sugar is coloured sugar whether liquid, solid or in between so for toast purposes, it doesn’t really matter. I’m in no way a purist or perfectionist which most know from my history of projects and adventures. I’m all about ‘gitten er dun’.

Have you tried making jam in your bread maker? Right now we don’t purchase bread or jam anymore, jam being of course the latest to strike off the grocery list.