Today starts our adventure with pigs 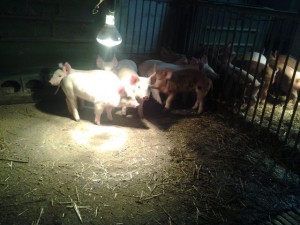 This is a ‘prior to picking up the pigs’ post. We’re getting our pigs today, and I am Xcited. With the chickens i was totally hesitant but thankfully they took pretty much no preparation. With the weaners, they take a lot more work ahead of time to get the pen just right, the feeder setup – and i don’t even have a REAL waterer yet. The housing took the most work for sure but was relatively cheap as its mostly free pallets and a bunch of plywood I had sitting around already. The hog panels were a great buy, not because of price, they were expensive. They offer great peace of mind for the first GO at raising pigs. No brainer pig setup with them, purpose built, and stainless steel.

I may need to weigh them down a bit so the pigs don’t get under them, they like (apparently) to lift stuff with their snouts and they get pretty strong. I have a few weeks to get used to them though before they will be strong enough for that.

I’ve got 2 bags of feed to start and i probably won’t stop purchasing a couple bags weekly until fall 😛 Going to be interesting to see how much they do end up eating.

All in all its like a new toy really. Guys like toys, especially big boy toys, and this is kinda like that. I get to spend money – which is fun – build stuff – which is fun – and buy some high priced little animals – which is fun.  And all of that is for the great reason of providing food for us. So its not just fun tinkering, learning, building and such, all the money spent basically comes out of our grocery budget but I get to play with the food before we eat it! What could be more fun than that??

Its not only learning for me either, it will be whole family learning. It will be like going to a zoo and museum, and school all at the same time except that we’re living it and we pay no admission other than a little handwork and sweat to feed them during their short lives.

And really, this shouldn’t be a surprise to anyone, it shouldn’t even catch an eye since 60 or 70 years ago, everyone in the country had a hog or two they were fattening for the fall. Its just what you did. Pigs are the garbage disposal of the last century, eating almost anything you give them and creating some nice rich manure that can go on your garden. Know that stuff you pay 20 bucks a bag for from home depot?? Well this is better and is the by product of raising 140 pounds of  pork (one pig cleaned and cut).

The more I do this, the more I think everyone should move to the country, and raise a few animals. Minimize your addiction and dependency on the supermarket, save some money, get healthy and get fresh air. This stuff really is easy.  For me, letting the chickens out and putting them in at night can be as little as 15 minutes of work a day but you’ll end up spending more time outside just cause you’re enjoying it! It really is easy, I can’t believe I wasn’t doing it before.

I have spoke of a cow, now that is a little more involved than ‘easy’. That is, as a gamer might quip, the next level and requires a proportional amount of next level energy and time but like i say, the more you’re out there, the more you want to be out there doing things like that.

You won’t be wasting money on green fees, burning fossil fuels or otherwise spending money, you’ll actually be MAKING money and feeling more fulfilled because of it all.

Go get a chicken NOW! and a pig…