So I can’t afford a complete off grid solar home setup right now. I have however had a good experience with my chicken shed solar setup. Problem is, when the power goes out at the house, I’m wishing that setup was up here. And usually the power will only be out for an hour so it doesn’t make sense to tear it all down, bring it up here just to have the power come back on and have to take it all back up there… Now in a pinch I use my Xantrex power pack solar (as seen to the right)

Its a neat little unit, 5 watt solar panel on it to top it off when off the grid, lighter socket for 12 volt power, two 3 pronged outlets, 400 watt inverter, LED emergency lights on the side. Actually makes a great emergency power box and I’ve used it a few times when the power went out, the LEDs are bright and light up the room easily. The inverter has been used 6 or 8 times to power my little incubator when the power went out, and its never let me down though the power outages were only about an hour long.  Now the battery in it is a 10 Ah, which for my 20 watt incubator is enough to run it for a number of hours. BUT, the battery is getting old and worn down in it. So after a good hour or so on the bator and then taking it off and plugging it back in shows the battery down to 0% charged. Which means 11 volts… thats not good really to be taking it down to 11 volts every time. Most suggest in fact that you should only deplete your deep cycle batteries to about 80% if at all possible. The less deep the discharge the greater the number of charge cycles you’ll get out of the battery all other things being equal. SO… though 10Ah may technically be enough, its using all its got to power it over a couple hours. And that doesn’t leave much else after an hour of powering the bator to grind coffee (cause thats essential in a grid down scenario!). I mean it does.. .I did it last outage 😛 But its getting close to zero power that i didn’t want to have the bator go off. In terms of critical things that need to continue to have power, thats one of them.

SO, having said all that, great unit. But I figured since I needed a new battery, AND I don’t have a second inverter, AND this one has a built in 400 watt inverter and charge controller etc etc, I figured I’d swap out the 10Ah and wire into it a better like I have down at the chicken shed. Its a group 31 (i believe) marine / RV battery. 12 volts, 115 Ah. Thats right, one hundred and fifteen amp hours! 11 times the storage of the battery that came with it. The inbuilt charge controller may not be able to handle the 90 watts worth of panels I want to put on it though so likely i’ll use another charge controller I have for that and wire direct to the batteries. The box then just becomes an inverter effectively. Saves my buying another inverter, saves me tossing this unit when I decide its not worth it to get another measly 10ah battery for it which would probably cost $40. The RV battery I have is from cantire and costs $140 (with the trade in of an old battery). 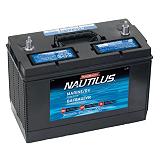 Its Canadian Tires largest RV flooded / wet cell deep cycle battery. it also happens to be by far the cheapest per Ah. And yep, I went through their AGMs the 4D and 8D batteries and the 6 volt batteries. Its about $1.21 per Amp Hour (which is a price comparison I’ve not really seen anywhere, Cantire doesn’t display that). I just started trying to compare the costs there, and I was after true deep cycle, lead acid batteries, and the largest amount of Amp hours for the money. The next one up I think is $1.40 per Ah which I think is the 4D battery which is 160 Ah but that much more money to purchase. So easily the $140 battery is cheapest per Ah, of course this assumes the same quality in make and in lead.. I’ll make the assumption that its pretty much the same stuff.

What I”ll end up with is a 115 Ah battery (good little start) hooked up to 90 watts of solar panels (to start) and hooked through my Xantrex power pack solar box to provide the 400 watt inverter mainly. The Xantrex will conveniently shot off power once its determined the battery is too low so it will manage my battery use and not let me kill the battery which every good charge controller or inverter should do, and its a ready made multi power tool with USB, LED lights, outlets, 12volt plugs and wall charger plugin which could in a pinch charge up the battery over night (though not at a real high amperage) Since a 12 volt battery is a 12 volt battery it doesn’t matter how big the battery is, the Xantrex doesn’t care, it just wants to see a 12 volt battery plugged in.

I think overall that is a great ‘up cycling’ of the Xantrex which is otherwise losing life and a fairly cost effective way for me to have a decent amount of usable electricity either in our camper or when the power goes out at home. One of those 115 Ah batteries will power all sorts of things, freezers, incubators, coffee grinders, multiple computers, routers, modems and provide lighting.  I can even hack it into my house panel with a switch so that in a big pinch I could flip the switch and run all household lights off that system.

Sure is fun building up this stuff! Great practice, great learning experience, and a great feeling of satisfaction when it actually all works and helps in a power outage!