As it relates to bible prophecy, the bible is replete with patterns and repeats with patterns of significance. Foreshadows, timeline events that appear to be being used by God as His calendar of events (see Jewish festivals) and such.

One of these measures and patterns is the jubilee year which is of great significance. Here is what it is:

The fiftieth year, i.e., that following the last year of seven Sabbatical cycles, is the jubilee; during it the land regulations of the Sabbatical year are to be observed, as is also the commandment “ye shall return every man unto his possession” (ib. verse 10), indicating the compulsory restoration of hereditary properties (except houses of laymen located in walled cities) to the original owners or their legal heirs, and the emancipation of all Hebrew servants whose term of six years is unexpired or who refuse to leave their masters when such term of service has expired (Gen. xviii. 6; ‘Ar. 33b; see Josephus, “Ant.” vi. 8, § 28).

Incredible biblically prophetic significance. Satan is the god of this world but one day we (who accept Jesus as saviour) will be returned to our rightful owner, and creator God. I think the coming Jubilee year is one of those times when Jesus may just return for His people following the pattern. It parallels other timelines and scenarios – the tetrad blood moons and eclipses, the 6 days of creation and the sabbath rest day on the 7th, and so many more pictures in the bible. They all add up to Christs soon return being (in the grand scheme of time on this planet) RIGHT NOW! We are directly IN the end times.

Fascinating stuff on its purposes, observances, when it started etc.

1) In the Cabala the number seven is a symbolic division of time, and is sacred to God. The week of Creation consisted of seven days, the last being the Sabbath. The Feast of Weeks is so called because it occurs seven weeks after Passover, the fiftieth day being Pentecost. These days are parallel to the years of shemiṭṭah and yobel. The duration of the world is 7,000 years, the seven thousandth year being the millennium, the Great Sabbath of the Lord (Sanh. 97a).

Below is an image from that site, the jewish calendar years and the associations. Read up on this as it indeed does directly relate to bible prophecy: 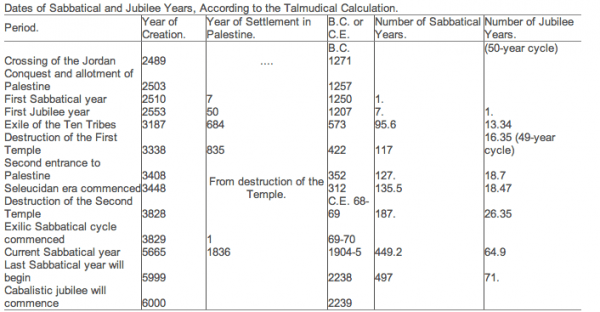