The shortness of time 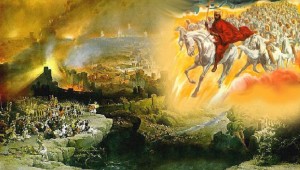 i’ve had the general sense and belief that we are in the last days. i thought thought that 10 years ago to be sure but it was only about the times and the seasons. Now the feeling is imminent. And its really as of the last few monthss. Some major world events are happening and approaching climax.

Some examples of news items that individually may not mean much but together really impress me:

And many more. The sheer number of things going on now is incredible and the number of prophetic events has sped up significantly since i got interested in bible prophecy which was more than 15 years ago anyways. There was interested in y2k of course but that was mostly the only big up coming event during the year. Now there are multiple prophetic events and things occuring on the calendar that suggest the Lords return is imminent, and even to the point where i really think he will return in the next year or so. I could be wrong, no man knows the day or the hour but the information and world events happening now are just amazing.

I know i’ve blogged about this many times in the past, again, i would suggest you checkout the list of news items on raptureready.com, scan through the last say week of news and you’ll see just about everything i mentioned above.

The Lord is coming soon!

2 thoughts on “The shortness of time”