Giants in the land

Did you know there actually were giants on the earth. Like the ones in the myths? Cultures from every continent of the earth have stories and legends of giants dwelling in their land. I wrote a blog before about the ancient myths:

How many legends are actually based on true history?

The bible speaks often of giants, the most known one is probably Goliath of the Philistines (transliterated: Palestinians). See the Wikipedia article here: http://en.wikipedia.org/wiki/Giant_(mythology)

The Bible (Genesis 6:4-5) tells of giants called Nephilim before and after the Flood:

“There were giants in the earth in those days; and also after that, when the sons of God came in unto the daughters of men, and they bare children to them, the same became mighty men which were of old, men of renown. And GOD saw that the wickedness of man was great in the earth, and that every imagination of the thoughts of his heart was only evil continually.” (Genesis 6:4-5KJV)

According to the Bible (Genesis 7:23), the Nephilim were destroyed in the Flood; however, further giants are reported after the Flood, including:

The Bible also tells of Gog and Magog, who later entered into European folklore, and of the famous battle between David and the Philistine giant Goliath. The 1st century historian Josephus, and the 1st-2nd century BC Dead Sea Scrolls give Goliath’s height as “four cubits and a span,” approximately 2.00 m or about six feet seven inches.[3] The King James translation of the Bible reports the giant Goliath as “six cubits and a span” in height—about nine feet nine inches tall, (over 2.75 m) (1Samuel 17:4 KJV), but the Septuagint, a Greek Bible, gives Goliath’s height as “four cubits and a span” (~2.00 m).

Jewish Historian Flavius Josephus also described the Amorites as giants in his Antiquities of the Jews, circa 93 AD, indicating that fossil evidence still remained at that time.[4]: “For which reason they removed their camp to Hebron; and when they had taken it, they slew all the inhabitants. There were till then left the race of giants, who had bodies so large, and countenances so entirely different from other men, that they were surprising to the sight, and terrible to the hearing. The bones of these men are still shown to this very day, unlike to any credible relations of other men.”[5]

A quick search on google for ‘Bible Giants’ will return a tonne of results. Somehow the world has forgotten about these and have suppressed the evidence. Its such a thing that is so ‘missing’ from our own history it does seem like a fairytale. It must be a distraction and suppressed straight from Satan since if we found good evidence of giants (and we have actually) that got out into the public, the scientists and archeologists would need to come to the conclusion that the bible was correct all along.. and we can’t have that can we 😛 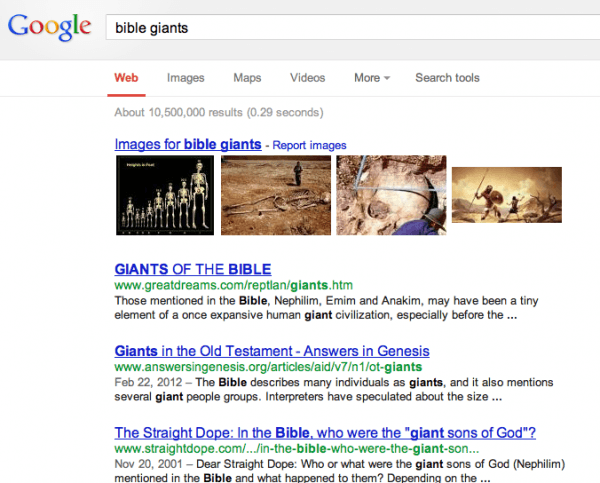 Now, some are hoaxes no doubt, image manipulation and perspective tricks are often used. This doesn’t discount the real evidence and legends of all the peoples of the earth. Did they just all decide to make up stories about huge humans? Its really not plausible. If evolution were true, I would think that most of the worlds civilizations would be atheist.

Truth is there is lots of good research out there regarding giants, huge stones moved in the middle east and elsewhere that humans of our stature wouldn’t be able to lift. Stone Henge? Baalbek, check out the stones moved by man here: http://www.bibliotecapleyades.net/esp_baalbek_1.htm 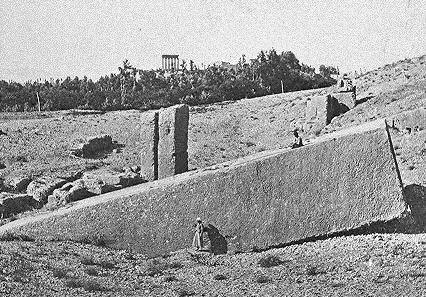 Next, google ‘giant skeletons’. You’ll see some amazing images of some really tall mummies.  The truth is that very large humans did exist and in a pre flood time, the planet would have been perfectly suited to the large humans.  Day in, day out the bible proves correct at every turn, and humans do just about everything possible to discount it and suppress the truth that is revealed to us in the fossil record, and by archeology. There must be some other reason for this then for there to be a God that we have to come to terms with right?!

The bible is historical truth and present day truth and it means salvation for those that read it and find Jesus through it.