I finally had a chance to get my snocaster going. I got a gear box from a guy along with a snow blade and a tiller of course which I’ve blogged about, I’ve yet to get pics of those up yet. Here is a pic of my tractor and sno caster attached. 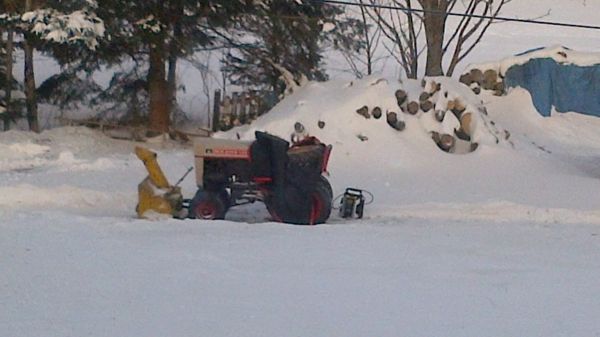 Initially I didn’t have the knuckle securely attached and it flew off and snapped my PTO :/ A new used PTO is about $80 … thankfully I had my Bolens G10 carcass sitting there with a working PTO though its a single belt version. Again thankfully it was a direct bolt on, just had to take off one of my dual PTO belts. It works. Have some tweaking to do, the chute swings around, I don’t have a handle on it so it just swings wherever it wants right now and I have a can of yellow rust paint to get it all shiny and new looking. Painting will likely only get done in the spring time. I actually don’t have snow chains right now so it means i can’t even get my tractor into my shed (small incline) hence the current position and blanket over the seat. (my chains are on backorder from samsbolens.com)

All things considered it works well and once I get my chains and potentially some weights I should have zero issues blowing snow.. The unit is so heavy on the front that it takes away a lot of needed backend weight.

I also have a snow / wind hood / cover for the tractor, though obviously I haven’t got that on. Likely that will be a project for this summer to get on now that I know I have a working blower. Sure is a fun hobby tractor! All playing aside, it did fairly efficiently remove a bunch of the snow from the weekends snow fall and more importantly it was able to remove most of the stuff the plow built up in the drive mouth, thats often the hardest task to do.

I need to adjust it higher as well as right now it scoops up gravel from the drive and I don’t need that with cars whizzing by!

All in all, a great little blower. It may not be as powerful, or shiny,  or even as large as some of the modern blowers that people have these days but there is absolutely nothing wrong with it!

2 thoughts on “The Sno-Caster (Bolens)”