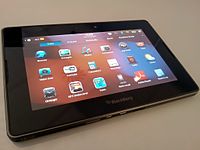 I gotta say, RIMs implementation of android apps on PB is pretty lame :/ Apparently with PB OS 2.1 they caused issues with running android apps, sideloaded ones at minimum. The use of android apps is full of holes and a bit clunky.  I had to resort to command line installs from my macbook with the PB in developer mode to get the Android Flipboard app installed. It worked a few times and now doesn’t. 🙁 Disappointed as that is one of the best apps to have on a tablet. RIM needs to make the playbook more user friendly for sure. They should have an app that just finds compatible files and installs them for you. I guess you’d call that bb app world… but most android apps aren’t converted so you have to resort to other sites like goodereader.com or crackberry.com for the bar files. Sure I like tinkering but I thought it would be smoother / more user friendly than this. Really hoping BB10 resolves this.

And while on the subject, their mail app which is new to 2.x version of the OS does integrate with IMAP. ONly took a year or two to get that in :S But it  has an issue, RIMs IMAP implementation doesn’t display / load all your custom imap folders. iPad does it granted ipad has limitations too but at least it works (on ipad, it doesn’t refresh your folders, you need to click on them and then and only then does it sync them. So you can’t just pop open the folder list and see what new emails are in each, you need to go to each, brutal.. so Apple has some ways to go to making it really useful too…)

There are other unpolished things on it which are curious. Most of the OS is really slick, most of it works well. Sometimes textboxes for example don’t register that you’re hitting them with your finger in order to enter data… doesn’t make sense, doesn’t seem like its still loading. Just weirdness like that in various places. Granted Apple has always been the company that really takes its time to simplify and make the interface just work so I can’t expect RIM to match it. Apple has a LOT of money now and resources. still, RIM has a fair ways to go to making it a tablet that you can buy for Grandma. At this time, for Grandma I would still suggest an iPad even with its limitations like available ports and interoperability with standard things like file systems or whatever…

More to come later I’m sure as I discover oddities about it.