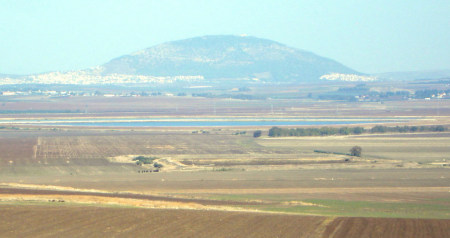 So have you heard of Armageddon? Basically its the final battle held in the valley of Megiddo which is a real location in Israel. A good description – as always – is found on wikipedia:

Armageddon (from Ancient Greek: Ἁρμαγεδών Harmagedōn,[1][2]Late Latin: Armagedōn[3]) will be, according to the Book of Revelation, the site of a battle during the end times, variously interpreted as either a literal or symbolic location. The term is also used in a generic sense to refer to any end of the world scenario.

The word “Armageddon” appears only once in the Greek New Testament, in Revelation 16:16. The word may come fromHebrewhar məgiddô (הר מגידו), meaning “Mountain of Megiddo”. “Mount” Megiddo is not actually a mountain, but a tell (a hill created by many generations of people living and rebuilding on the same spot)[4] on which ancient forts were built to guard the Via Maris, an ancient trade route linking Egypt with the northern empires of Syria, Anatolia and Mesopotamia. Megiddo was the location of various ancient battles, including one in the 15th century BC and one in 609 BC. ModernMegiddo is a town approximately 25 miles (40 km) west-southwest of the southern tip of the Sea of Galilee in the Kishon River area.[5]

According to one premillennial Christian interpretation, the Messiah will return to earth and defeat the Antichrist (the “beast”) and Satan the Devil in the Battle of Armageddon. Then Satan will be put into the “bottomless pit” or abyss for 1,000 years, known as the Millennium. After being released from the abyss, Satan will gather Gog and Magog (peoples of two specific nations) from the four corners of the earth. They will encamp surrounding the “holy ones” and the “beloved city” (this refers to Jerusalem). Fire will come down from God, out of heaven and devour Gog and Magog after the Millennium. The Devil, death, hell, and those not found written in the Book of Life are then thrown into Gehenna (the Lake of Fire burning with brimstone).[6]

A lot of things are fascinating about this location, not the least of which is that its the final battle between God and Satans army – and its no match FYI. The nations are arming prior to this great war right now. Most recently turkey has received Patriot missiles via NATO to defend itself against Syria, thats the immediate excuse. The extension is that its to shore up defences against anything coming out of Iran and protect Turkey which is an ally in NATO. The outset is that its a ‘good’ thing for the safety and backup of NATO nations. The long view though is that weapons are being place and built up in and around Israel as the bible says all nations will come against Israel.

Russia has been regularly docking warships and now subs beside Syria and are having war games there:

The US has 4 or 5 aircraft carriers in and around that region. Has the world come together with all its weaponry around Israel? Oh yes, in a large and impressive way really. Its really very interesting to watch the developments there, its also amazing war hasn’t just started. The rumour is that Iran is ready to go. I mentioned before that they had used some nuclear material for fuel rods or something for their reactor a while back which seemed to lessen the available stockpile for a nuclear weapon. Well.. they took the rods out of the reactor and have perfected enriching whats left of the rods back into weaponized fissionable material. The talk is that they have all the technology and indeed nuclear material for multiple bombs, they seem to just be waiting for something. NOt sure what. The chatter of the 12th imam is rising again.

http://themuslimissue.wordpress.com/2012/11/28/iranian-video-says-mahdi-is-near/ New evidence has emerged that the Iranian government sees the current unrest in the Middle East as a signal that the Mahdi–or Islamic messiah–is about to appear.

CBN News has obtained a never-before-seen video produced by the Iranian regime that says all the signs are moving into place — and that Iran will soon help usher in the end times.

While the revolutionary movements gripping the Middle East have created uncertainty throughout the region, the video shows that the Iranian regime believes the chaos is divine proof that their ultimate victory is at hand.

‘The Coming is Near’

The propaganda footage has reportedly been approved at the highest levels of the Iranian government.

It’s called The Coming is Near and it describes current events in the Middle East as a prelude to the arrival of the mythical tweflth Imam or Mahdi — the messiah figure who Islamic scriptures say will lead the armies of Islam to victory over all non-Muslims in the last days.

We are swept away and disengaged from the middle east due to the Christmas season, blinded by the apparent wealth we have even in the face of a dire worldwide economic situation, lulled into a sense of safety by the no show of the mayan apocalypse. We are ripe and ready to be side swiped by stuff that the bible prophesied hundreds of years ago but which we all make fun of as silly just like the mayan day of doom which came and went.

42 “Therefore keep watch, because you do not know on what day your Lord will come. 43 But understand this: If the owner of the house had known at what time of night the thief was coming, he would have kept watch and would not have let his house be broken into. 44 So you also must be ready, because the Son of Man will come at an hour when you do not expect him.

We are ready for deception now like no other time, and some of us are also ready for the return of Christ the second time.