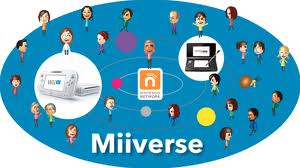 Miiverse is Nintendos video game universe, full of Miis. Hence, MiiVerse. Its really a straight up forum, a flat list of comments per game basically. Really simple. And so you can see and comment on posts real time which is kinda neat.

Will it stand the test of time though? Honestly there isn’t a ton drawing me to look at Miiverse unless I was looking to do some online gaming and asking others if they wanted to play online. There aren’t any video games or ways to post links to interesting articles. Most you can do is post 1 screenshot at a time in a post with a comment on it. And that comment is limited to 100 characters or something which is really short.

In a way its like a Facebook wall, you see all the recent posts, or sort by popularity but because its specific to a game, there is only so much that is interesting there. If it was an open forum like IGN message boards or something like that discussing gaming, or the latest video game trends or something, that would be a lot more interesting.

As well Nintendo fully moderates posts for language, content etc which is good really, gets rid of most of the swearing and whatever.

Still, if its just a message board specific to each game it gets tedious to go into etc. An upgrade would be a central / general forum list where you could discuss anything, there would be interesting stuff there I’m thinking.

The ability to post links such as youtube, news items etc would be another level of interest added though that would be harder to moderate.

Or how about adding a ‘friend request’ link beside each of the users posts, or a private message interface for none friends (maybe they have this but i haven’t noticed it). And how bout a thread within a particular game for cheats, tricks, and a general forum for  rumours or suggestions to nintendo… They need to fill out the ability. Right now the MiiVerse seems really flat, basic, which likely is part of what they were going for but if they want to keep people using it past the first month after launch (since we’re all still enamoured with it at this point), they need to push out some big updates and improvements to it.

The issue with the Wii was how stale all the channels got. They had a photo channel and a news channel and all the rest that basically NEVER got updated and were completely useless near the end. Who wants to click on a channel and wait for it to load just to see weather? How about a widget that does that instead.  I don’t want Nintendo to totally neglect all its channels like they did 100% with the Wii. I don’t have much faith that they learned from that since they are likely already full steam ahead working on the next generation console.

My guess is that they could extend the life of the WiiU if they continued to improve the interface and deliver features. They still have 3D to do (which Iwata has rumoured) and they can implement the use of dual gamepads which they said would come out a year after launch or something.

I know they have smart people there, just really hop they get some of the basic stuff covered like ensuring Miiverse doesn’t become a weather or news channel like on the Wii since it *could* be  a killer feature. I wouldn’t say it is just yet…