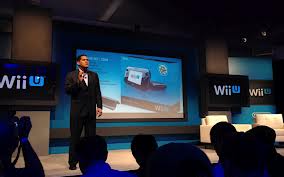 Well all, its WiiU launch night across North America. Well east coast as I write this anyways. The line up is long at the Nintendo World store in New York and Reggie is out signing autographs. Its an exciting time for all gamers as console launches come only every 4 years or so (Sony and MS tried to extend the lifespan of consoles but thats another story).

Nintendo sticks with its ingenuity and creativeness while MS and Sony simple copy what they do 6 months or a year later (google MS surface which MS says will be doing just what WiiU does. And read about Sonys Vita streaming games – horribly – from the PS3 in a similar attempt to do what Nintendo is going to do successfully)

It always makes me wonder why MS and Sony don’t innovate?… I mean really innovate.  Why not try something that Nintendo hasn’t tried – 3D console gaming maybe?? I guess Sony has tried that. The issue is that Sony and MS are too safe, they try something but don’t really put their faith in it and sell it as a peripheral, attachment or whatever. When Nintendo does something, that ‘thing’ is out of the box, ships with every system, is integrated from the start so that you don’t have to worry about fragmentation of the hardware base or worry that some consumers won’t get x attachment. Its a much greater leap of faith to step out on a limb and do that.

Nintendo has failed at this before but they’ve had more success than failure. Remember virtual boy? I don’t really, that was before my video game time… but it was a step out on a limb that miserably failed.

Wii  however with its motion control and being the first one to really go with it in fact did change the console gaming world. It was a gamble, but Nintendo put all their eggs in that basket and did it well enough that it succeeded.

You gotta respect Nintendo for that. I don’t know why people by Sony stuff or MS consoles really. I’ll give it to them that I wish Wii was HD and had all the latest coolest graphical games however,  it was only 3 months ago that we actually got a TV that would do HD so all that want would have been useless anyways and Nintendo knew that. They knew 95% of the console gaming consumers didn’t have HD sets at the time the Wii came out and so they went for the lowest common denominator which for sales means the broadest customer base – MS and Sony were playing the hardware war game at the time each trying to outgun the other while Nintendo swept to victory with a graphically weaker system. The difference? The game experience.

Will Nintendo win again with WiiU. If preorders are any indication it will continue to be sold out through Christmas at least. Will it have legs to continue to sell? I think so. With HD and a unique exciting controller, I think the possibilities are even MORE endless than with Wii (sure, that doesn’t make sense but this is poetic license I’m taking see?!).

I was a bit leery of the Wii but I supported Nintendo because they have the most fun games. With WiiU I really think they nailed it. Sure there are things I would have liked to see with WiiU but overall, I think they made a lot of great decisions. I predict another console generation win for Nintendo on this one.

I’ll make a prediction about Sony too just for fun, I think they’ll make PS4 and that will be it. The company is in bad shape, the console department is losing money. I think this will be a fight between MS and Nintendo for the generation after this one. Should be interesting to see though.