There are lots of sources to find news related to prophecy. If you’re ‘up’ on bible prophecy and by ‘up’ I mean you’re reading your bible, reading Genesis Ezekiel, Daniel, Matthew, Revelation, and all the books inbetween which hit on the future, you’ll find a ton of prophetically significant news in the general media.

CNN for example or the BBC, or CBC for Canadians even. The news is about things like Irans quest for a nuclear weapon, news about a two state solution in Israel, news about a president of the EU , even global warming pieces and earthquakes.

Every day you can find something that points to birth pains, or a lead up to a one world currency and government. You can picture the chess pieces moving into place on the board getting ready for the final configuration of nations. Oh, and I forgot to mention the rise of Russia and China as world economic and military powers which is hugely significant as it relates to world war 3.

Current news should keep Christians on their toes, in expectation of the return of the Lord based on what He said through His word about what the days would be like now. 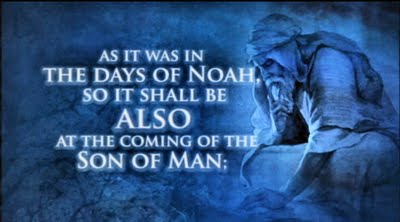 Genesis 6:5 The LORD saw how great man’s wickedness on the earth had become, and that every inclination of the thoughts of his heart was only evil all the time.

You should go read about what the earth was like in the days of Noah, and how God eventually destroyed the world all except for one family. THere was even a pattern of the rapture there (hint: check out what happened to Enoch, he wasn’t destroyed, neither was he taken through the period of tribulation – Genesis 5:24 Enoch walked faithfully with God;  then he was no more, because God took him away.  )

A good source for news as it relates to bible prophecy is raptureready.com. They have a whole page updated daily with prophetically significant news (earthquakes, world governments, wars and rumours of wars).

Some interesting news just yesterday is Tony Blair suggesting that there be one head over the EU, a single president. He suggests that people can relate to a single leader better than they can to a council of people.

Also daily news about new earth quakes. And you can suggest that we report on it more sure, but I believe that really only accounts for a percentage of the stories.

There is some data from USGS here: http://earthquake.usgs.gov/earthquakes/eqarchives/year/eqstats.php

The stick by the story that earthquakes are not increasing bout since 2000 the line graph effectively is going upwards. Whether its a phase or an ‘active’ period for earthquakes… who knows… If its fully natural and something God is doing directly or letting happen specifically, the quakes have been going up.

If you put all these ‘interesting events’ together, it starts to fill in a picture of our times. We aren’t there yet, there are still some countries that have to fall, some that have to reorganize before they fit what the bible speaks of in terms of organizations and where the battle lines are drawn. Certainly as I’ve said a few times, Syria is a country that likely does need to fall into the hands of the muslim brotherhood to increase its dislike as a country for Israel. If you don’t believe the MB changes countries to dislike Israel, read up about how Egypt has severed peace treaties with Israel or plans not to renew them. They are easily more vocal about what they don’t like now then when under Mubarak. Geopolitics is a huge driver of prophecy, maybe not driver but the countries are aligning themselves and getting into a particular state of being and leadership which will usher in the final battles.

Does Egypt want peace with Israel? Nope… If these countries were the least bit interested in peace Israel would be the first one to the table and signing on the dotted line. Instead the countries continue to move farther away from peace.

In August 2012, amid a time of uncertainty regarding the future of the peace treaty, the Egyptian Military entered with Tanks in to the de-militarized zone without Israeli approval, in violation of the peace treaty terms.[6] Egypt has also been reported to have deployed Anti-Air Missiles on the Israeli Border, a move which clearly targets Israel, as the Bedouin groups in the Sinai have no aircraft. In 1970s this was the first step Egypt took in the lead up to its launching of the October war.[7] Egyptian Defense Minister Abdel Fattah al-Sisi affirmed during a phone call with his Israeli counterpart Egypt’s commitment to maintaining the 1979 Camp David peace treaty with Israel according to Arabic-language news agency Al-Hayat.[8] This is disputed by Israeli sources[9]  http://en.wikipedia.org/wiki/Egypt–Israel_Peace_Treaty

Oh and did you hear about the air raid in Sudan of a bomb factory? Of course not, it wasn’t in the north american media, not that I’ve encountered anyways… why not?? Read about it here: http://www.timesofisrael.com/israeli-interests-are-legitimate-targets-after-khartoum-bombing-warns-information-minister/

Israel denies it was them of course.

SO so much happening and my fear is that most have no idea of what is happening let alone know the significance of what is occurring. We ‘westerners’ live in a bubble. And that bubble needs to be popped for us now or it will be soon when reality comes knocking and at that point it will be too late.