Here she be, the WiiU 32GB Deluxe edition wrapped in black: 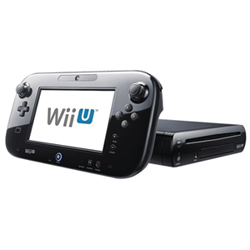 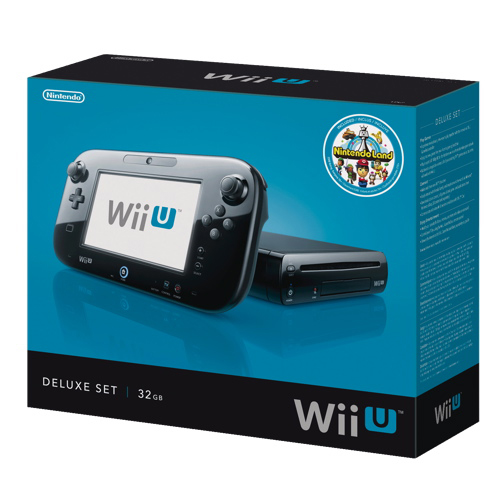 I’m mostly decided this is the version I want. For a number of reasons. First is the pack in game, you need a game to start anyways. The basic unit doesn’t pack in any games so take on $50 to the basic unit to get the big game for launch – Nintendoland.

In addition, you get a charging cradle, 32gigs of extra memory on board which is great, likely all you would need for storing wiiware and such (I had an extra SD card in my Wii, it was 4 gigs, it wasn’t full). 8 gigs in this case for the basic sounds sufficient but there will likely be a lot more things they’ll be putting on it, larger wiiware games, saved game data, social media data … whatever. So just like iPad, I’m going to get the big version, it will pay off. Sure i can expand the existing 8 gigs with an SD so if this was the ONLY reason to get the deluxe, I likely wouldn’t go for it.

The cache of having the ‘black’ version is nice too, its going to be considered the ‘hardcore gamers choice’ for sure. Same as the expensive versions of 360 for example. Not to mention, better for resale should I ever decide to sell it – which I wouldn’t but hey…

So it comes with Nintendoland, its the WiiUs version of WiiSports. This is a game of mini games, again, akin to Wiisports. In this one its an amusement park and you go from ‘ride to ride’ on a train around the park, very cool. I expect a lot of Miiverse and Mii interaction and social media addons with this. I loved WiiSports so I’m sure Nintendo has done it again with super simple and fun ‘pick up and play’ games.

You also get an extra charging cradle for the handset – as opposed to just an AC adapter which is a nice perk, again by itself not worth the extra money but a nice pack in.

You also get 10% off digital purchase for the next 2 years. THat could add up real quick in savings if we download lots of games and I’m sure we will. The Wiiware games like Lost Winds and various other virtual console games regularly entice us to download them and they are quite fun too. Its a relatively inexpensive way to enjoy a new game – without the $60 pricetag every time which is hard to do more than once or twice a year.

Oh, and its black, did I mention that? I think Nintendo added in just enough to the deluxe package to really encourage a lot to make the jump to that version. When you line it up, the more expensive version could be a better deal depending on how much you download wiiware for example.

The TVii software which I blogged about last (and before they actually revealed all the features on it) looks indeed to be a killer feature potentially.

All this said and done, I don’t have an HD tv but for Nintendo games, most of that doesn’t so much matter, at least not for right now, the fun is in the gameplay, not the HD though it will do 1080p 60FPS (Call of Duty – Black Ops is running at these numbers)

My current donations are $0 for this so as last time, feel free to donate to this fine cause 😛   Good times, really enjoy looking forward to and getting the latest gaming console. Its totally frivolous but totally enjoyable at the same time.