This is the year of the garden tractor. Why? Well because I busted my lawn tractor. Was using it for too much which i’ve blogged about already, but mowing, hauling firewood, ploughing snow…

Anywho, I’ve been looking for a garden tractor as they’re meant for serious work. They are built bigger and stronger generally and come ready to attach ground engaging implements, most are equipped with some sort of PTO (power take off) for snowblowers, tillers, mower decks etc. 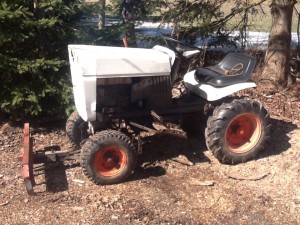 Well I just bought a 1968 (i think) Bolens 1050. Its in rough shape, its been used for some 30 years straight. The last owner used it year round basically on a farm. Its not 100% original but its close. For having been used as much and as hard as it has been, its stood up well!

I think it would be interesting to get an even more original one, there seems to be many on the market across Canada. The interesting thing is that their all ‘daily drivers’ as they say. People are selling these 30 year old machines ready for use, not to sit in a showroom but equipped with snowblowers and such and running well as their described. Most of the reasons they are being sold is that the owner is getting a bigger tractor or because this tractor is an extra one. They are so well made that they last no problem for 35 or 40 years, incredible! With some TLC, and regular maintenance, theres probably another 20 years in this tractor.

One thing about them is that they are made with steel and cast iron. What does that mean? Well it means, 1) they are good and strong and 2) if they DO break, you can weld them up quick and get on with it. I like the REAL metal in these units as opposed to the aluminum tranny case (which is what broke for me) on my craftsman lawn tractor.

Similar tractors are the Cub Cadets or Ariens but cubs for example seem to be really expensive still. These bolens seem relatively cheap in comparison and are just as well built.

For me, I really use a tractor all year around, pushing snow, grading the property and the driveway, pushing decks and other heavy things around, pulling my trailer around the yard to pick up brush, move island stone around, move dirt from one pile to another, just about any outside work you can think of, I find a way to use my tractor and trailer for so to have something that can stand up to that is great, and I’m excited to get into the Bolens collecting hobby.

There are lots of forums from people actually who collect all the different attachments. There seems to be lots of people across the country with old Bolens hardware too which is interesting to see. The parts and attachments stand up enough to be 30 years old and still bought and sold.

My project this next week is to get the old craftsman all tuned up and working so that I can sell it (before it breaks again :/ ) Its just as well, its 15 years old and still goes well all things considered.

Should be a fun summer of playing with it and getting some work done around the house at the same time!