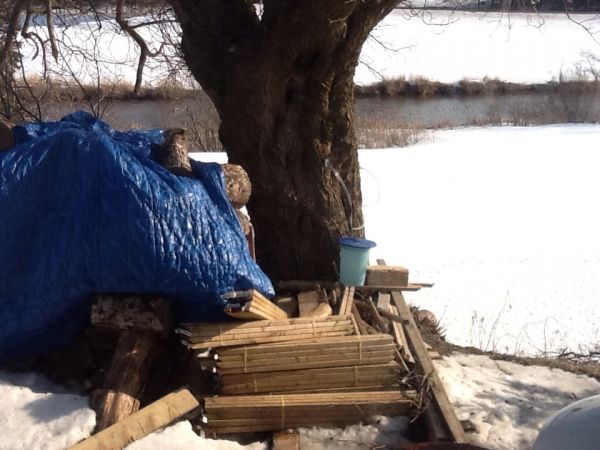 Its well above zero right now and no sap yet. Its good and sunny too and dry as a bone. I think I need to do more research on just what actually starts the sap running. Its supposed to be below zero nights and above zero mornings / days. The temp difference creates a pressure differential within the ‘veins’ of the tree which initiate the suction / pumping effect which then draws up the sap from the roots.

However, since the sap isn’t running yet, there must be other factors. The tree must have a bit more info on whether its actually spring yet, actually time to start drawing up the sap. There must be other indicators to the tree of environmental cues that it takes for that to actually start. This winter it was freezing and above zero many times throughout which is really odd. I always wonder how the trees don’t get messed up .And sometimes they do start budding early due to the warm whether. It must take a bit more thawing of the ground before the sap runs… Hm… can’t wait. Though, having said that, I’m not really ready for the boiling part yet anyways 😛 Need to setup my fire pit outside – won’t be boiling it all off in the house this year as that does create sticky walls, and generally high humidity, not unlike a grow-op…

Because its so sunny and warm, its a beautiful morning to relax with my coffee. Arden and I took a break in the sun from the window this morning. Just resting in the warm sunlight. Also nice to wake up to a house that is still 20 degrees basically rather then a chilly old 16 degrees which it usually is during the cold part of the winter. That means spring is coming!

In other news, we’ve been hit with a solar storm, the first large one of many to come as we’re now in the solar maximum cycle (an 11 year cycle that goes from solar max to solar min and back again, with associated strengths of solar blasts). This solar max cycle peaks in 2014 I believe. Stay tuned for some satelite damage and maybe some power grids going down over the next couple years. Funny how all this is coming together with the rest of the ‘end of the world’ predictions eh?! We’re in for exciting times whether the Lord comes back or not. The mini prophecy update would be that Syria is in bad shape, still looking out for the destruction of Damascus (Isaiah 17)

Isaiah 1:1 The burden of Damascus. Behold, Damascus is taken away from being a city, and it shall be a ruinous heap.

Hey, I didn’t say it! Damascus is one of the oldest continuously inhabited cities. So the place in the world where we’re at right now is very interesting.

Also, the Israel / Iran standoff is key, it looks like Israel will be forced to do something this year sometime. They’ve been putting it off for years. THe leaders in Iran have said they want to hit Israel before 2014

Read it for yourself 😛 Their 12th Imam is coming back very soon, read up on Islamic Escathology to see what I mean. It effectively is the inverse of biblical escathology, like EXACTLY inverse, its a fascinating study.

I’m excited for the soon return of Jesus for His bride (the body of Christ). While obviously death and destruction are not wanted, I’d love to have peace in the world and be able to live to 80 years old and have grandchildren, .. based on bible prophecy and the state of the world, I just don’t see that happening. I’m happy because I know what the end game is and I have a hope within me, the salvation of Christ, which when freely accepted means I will be living with Christ in heaven when the day comes that I die (or the rapture occurs – another thing to go study. Lots of examples of rapture, Enoch, Elijah. Also illustrated and symbolized in the Jewish wedding, even the story of Isaac and the sacrifice.)

God gives us this info so that we have an idea of what is happening so that we can recognize whats going on so we’re not surprised and it also provides a sign post showing us that His plan for this world is wrapping up and we know where we’re going.

Interesting times, meanwhile, I want to make the most of the time I have right now on earth, ensure people know about Christ and bible prophecy so they aren’t afraid, and I want to enjoy His creation – ie maple syrup, and other such hobbies.

God made an incredible earth, abundant in life and good things!