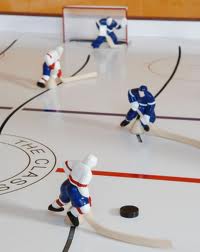 This year playing hockey I’ve noticed that I wasn’t as good as I used to be, though I was never a superstar or anything but I was fast. Now not so much. I realize I’m on the down side of the hill now. Most of it comes from my physical fitness which isn’t the best since I sit behind a desk 8 hours a day. I just don’t get the exercise anymore to stay in shape. I think 10 years ago, you didn’t really need to exercise much, you were just in shape.. No need to exercise, but as you grow older, you start getting into the 9 to 5 work week and such I think it just adds up to where you aren’t naturally full of energy and strength anymore and you aren’t exercising, cause you never did (me) so you just start getting slower. I probably have an extra 10 lbs on me that I didn’t have before but thats it. I’m not fat, just not keeping up where youth left off.

Some of my lack of hockey production comes from only playing once a week and then only 20 times a year or so.  I once played in a pickup league all year around, that was amazing, though it is a large time and money commitment.  Nonetheless, I love playing whether I’m ‘as good as I used to be’ or not. I think right now much of it  is down to my stamina which I can work on.

I won’t promise to change though, no, I’m fine where I am, I do have lots of other things to keep me occupied these days.

One thought on “Downhill”