The problem with urban composting 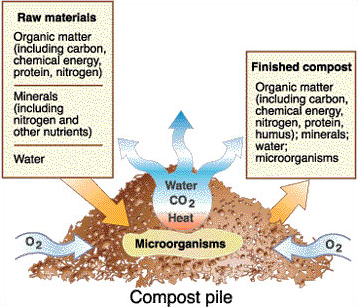 Let me define, urban composting is as I define it, putting compostable stuff to a great big green bin that the municipality takes away which is part of your taxes.

1) I’m kinda against the separation of compostable material and non compostable material. Why? We end up with a GREAT compost pile, but we also end up with a garbage pile which has plastic bags and such which compost that much more slowly because there is no combined compostable material.  Basically I think it harms what would otherwise be a better rate of decomposition for things like bags, metals, plastics (yes they do all componst eventually). Instead we keep out the compostable material and slow the process of their own decomposition. Now.. there are smarter people then I creating policy for this stuff but I sure would like to know the benefit of separation. The only reason I can see is if we otherwise use the composted material that was separated for spreading on fields again or something…

2) You get a lot better bang for your buck if you compost your own stuff or otherwise reuse it. Why? Well simple really, you PAY to get it taken away, and that food that was bought that created the compost cost money as well, so you’re paying twice, once for the food, and then again to have said food taken away. But you say, you can’t eat orange rinds or egg shells? True, but there are animals around the house that can and will and they will PAY you for the food too, so you recover part of your costs in purchasing them!

Crazy you say right? Well first thing is composting your own stuff, get a barrel, put in food, leave it there for a while and you get fresh potting soil out of it. (how much do you spend every spring on a bag of potting soil??) Now you just saved 3 times in theory (if you didn’t have to pay taxes for it already). The other thing to do is to get chickens or other animals which produce eggs, meat, etc. They love table scraps and will happily convert your left over into organic fresh food. And even the stuff they don’t eat will be eaten by bugs around their cage, and the bugs will get eaten by the birds so even something like egg shells will eventually get eaten by something up through the food chain and end up back in your stomach.

Whats the third advantage to this? Free exercise and fresh air cause you’re taking compost out, mixing the compost, tending to the animals. The health effects quickly multiply, exponentially even when you start doing things the way the folks used to do it back in the day.

All that said, do we do this right now? No. But the plan is this summer to get some chickens for meat, ones that you get and raise for 3 months and then slaughter before winter. So the whole compost thing would go directly to them. Certainly there will still be things we throw into the green bin like pizza boxes and such which we could definitely compost,… and maybe we will! Add that to our summer list instead of giving the government our good composting material!

The whole ‘do it yourself’ thing takes on a new meaning when you’re saving money, living healthier, being more active, saving the environment, lowering your carbon footprint (less fuel and therefore emissions from the garbage truck as it doesn’t have to pull as much weight from your curb every couple of weeks. Hey, every little bit helps! Imagine if everyone composted 90 % of their own stuff??)

So be more inventive when it comes to composting, don’t think of it as JUST creating soil that you may not have a use for. Spread it on your lawn to help your grass grow greener, plant a garden, get a bird or two for food that might enjoy some of that stuff you throw out!