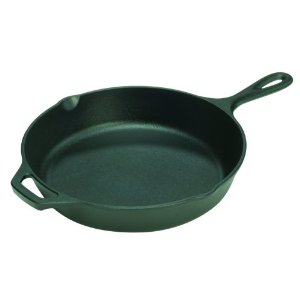 The benefits of cooking with cast iron are many. I should create a new ‘healthy living’ tag I think. One of the choices I made way back was to start using cast iron. Well the first choice was to see if I could live with cast iron cooking. The whole seasoning thing was scary and even with seasoning if done right, would it still be as non stick as non stick cookware? Enough so that it wasn’t completely annoying to cook with?

NOTE: I may have blogged on this before… but its worthy of another post!

After probably 5 years or more of cooking with it, I think we have it down and its basically as non stick as our little frying pan. Part of the key is to season it probably once a year anyways.

First, here are my tips for maintaining it:

(to learn how to season cast iron, there are tons of google links like this on the subject: http://www.wikihow.com/Season-Cast-Iron-Cookware)
How to make your own lard! See my video on the subject rendering hog fat down to pure white lard:

Cooking in cast iron is known to greatly increase the dietary source of iron. This is especially true when cooking foods high in acid, such as tomato based sauces. There is less of an effect for foods that are quickly fried in the skillet. As you might expect frequent stirring of food will also increase the amount of iron. Cooking in cast iron can often provide all of this element that a body needs. http://www.holidaycook.com/cast-iron/health-benefits.shtml

In early 2006 the Environmental Protection Agency (EPA) asked eight American companies, including DuPont, maker of Teflon-brand nonstick cookware, to work towards the elimination of PFOA—which they labeled a likely carcinogen—by 2015. PFOA has been shown to cause cancer, low birth weight and a suppressed immune system in laboratory animals exposed to high doses of PFOA. Studies have shown the chemical to be present at low levels in the bloodstream of 9 out of 10 Americans, and in the blood of most newborns. And although the effects of PFOA at lower doses in humans are disputed, there does seem to be a link between PFOA and raised levels of cholesterol. More seriously, some people have claimed that PFOA exposure caused birth defects in babies born to mothers working at a Teflon plant in the early 1980s.

So, for your health and the health of your family, I would recommend everyone get cast iron cookware – ESPECIALLY if your non stick stuff is scratched – and whose isn’t right?. When its scratched, it leeches even MORE harmful chemicals into your foods. Its never good to cook with any oil based product, flipper, pan, etc. Even heating up plastic bowls or having hot water in them for mixing foods can cause issues. Get stainless steel bowls people!
And never heat up ANYTHING in the microwave that is in plastic or has plastic wrap on the top. Horrible 😛

That was off topic a bit. Go buy some cast iron now, you’ll learn to love it!