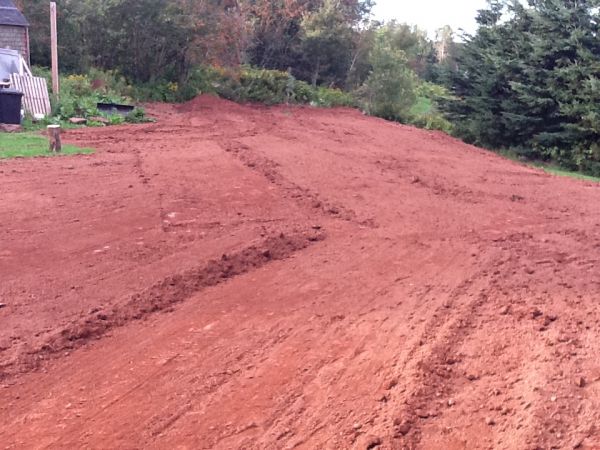 We’ve been spending and spending money on our house, all part of the fun I guess. In theory its all an investment, most of it anyways. We just got a bunch of grading done (see pics). The purpose there was to attempt to minimize water flow into the basement. On that side we had issues mostly because the grading was non existent on that side of the house. Making for a more moist then normal basement. The grading price was actually very reasonable! $750 to get it all done and the guy did a great job (Maritime Construction). It was done in basically half a day and we got much of the rest of our backyard leveled out too, cause the extra dirt had to go somewhere. He even buried our big pile of brush under it all 😀 Dug a hole with the bulldozer, drove over the pile to crush it and spread dirt over it. Excellent extra there. 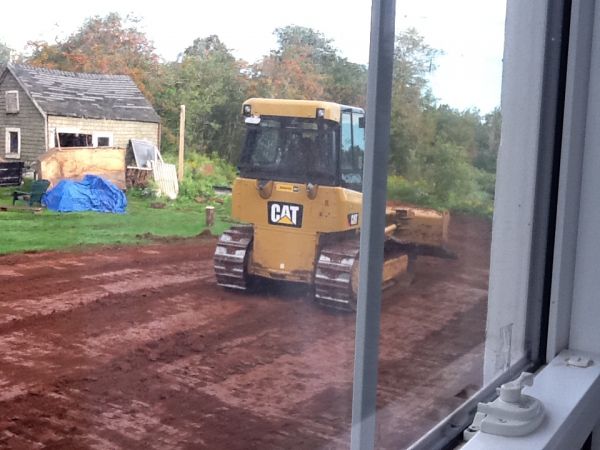 The ‘ditch’ is a bit deeper then Lindsey would have liked it but I think the sharper the grade the better! Let nature do its thing I say, saves electricity and expensive digs for weeping tiles and other options that would otherwise need to be implemented just because the water didn’t have a chance to go anywhere else. Just need to get it seeded now (and I need to google to see how late in the year one can put grass seed down without it just getting killed over winter) 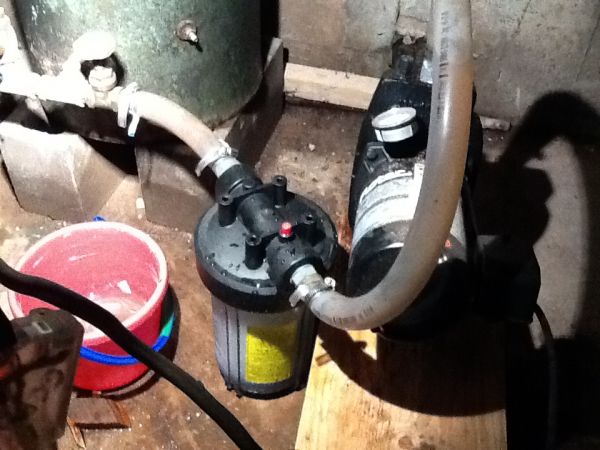 Finally today I got a water filter, a ‘whole house’ filter. Its a high capacity 20 micron filter for sediment, rust, sand and such. Its perfect for well users but can be installed on the city water supply too just to ensure cleaner filtered water. YOu can get finer filters even for things like bacteria or charcoal ones for small. I opted for the most coarse, least resistance model. Our issue mostly is sand / sediment, its the cause of the red later in the bottom of the toilet for example. Its a simple cause and a simple fix. I went with a high capacity filter just because the easier it is to push the water through it, the less electricity and wear and tear it will be on the pump. Filters also are invaluable for the price it costs in saving other home f liters, washing machines and all your drains from the inevitable build up of sediment t hat is passed through to the well. This one has a see through base on it which is perfect for determining when to replace it. Only issue with this one, unlike the smaller ones is that it doesn’t have a pass through or shut off so that you can change the filter without stopping the flow of water… didn’t think to look for that.. Oh well, it just means I flip a switch to turn off the pump and close a valve on the pressure tank, no big deal. 10 minute interruption.

Similar benefits and such can be gained out of a furnace air filter, which I just replaced today. A fresh filter keeps the air in the house cleaner, and allows the furnace to operate more efficiently which means you’re more comfortable and saving oil / electricity / wood to heat the house up since there is overall less resistance to flow. Changing filters seems small but they actually do a ton of good around the house, in your cars or engines etc.

ANd they are one of the cheapest ways to improve performance / efficiency, example, I have a K&N air filter on my bike, its also washable, so its reusable and provides better airflow then the stock filter which allows for more horse power, better fuel economy and savings just on having to replace the filter there.

Which brings up the question, can I get a K&N for my furnace… I’ll have to look into that!

So we’re spending lots of money, but I guess thats par for the course in home ownership right?