A good life isn’t an easy one 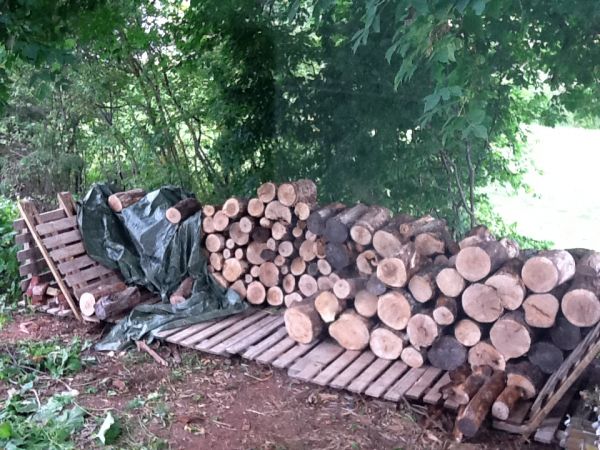 A good life isn’t necessarily an easy one, and most often is not. Course that doesn’t mean your whole life is a trial, just that hardship helps you appreciate the easier times.

I have lots of time to think while sluggin firewood. The image is of one of my 3 (so far) stacks of wood. This one was ‘designed’ out of free wood pallets. Free pallets have many uses. I was able to make good use of them to make a nice stand.

I life / touch each piece of firewood probably 6 or 7 times before it actually gets burned. From throwing it off the lumber pile, to throwing it into the trailer, off the trailer, stacking it, tossing it down the shoot to the basement, s plotting it, then stacking it all over again and once more into the fire. How many times was that? 8 Times? Suffice to say, I get a lot of exercise and I have a lot of mindless time and some of that time I think about things, what I might write for a blog post, how this job could be made easier, how i could decrease the number of ‘touches’ of each piece of wood.

Most of this job though comes down to hard work, some tools may make it easier but in the end there is still some hard sluggin to do one way or another. I was thinking about how they did it in the old days, with no chainsaw :S Hand saw it into blocks, hand split it! (i have an electric splitter). This was easily a full time job to get your wood together.

A good life isn’t an easy one necessarily and people for 95% of history had to do all of this by hand. Its only the industrial revolution where we started getting machinery, mechanization of these tasks that freed us up, or on the other hand allowed us to do bulk firewood (which led to companies specializing in certain tasks, anyways, thats a lesson for another day).

Really, often I think the people back then were a lot more fit and healthy then we are and its because of the hard work. They had tight knit families, good times, good food, lots of help around the house since the extended family would often live in the same house. It was a community thing, everyone helped so the work wasn’t overwhelming and just that fact made for great bonding and memories and the idea of family and community working together.

Some would likely be happy to argue that even though their lives seemed tougher then ours, their lives were better because of all that one got out of such a situation, strength, health, close friends and family.

We’ve strayed far away from that, everyone does his own thing now to the detriment of relationships and lives. Now because the job seems so big and there is no help like in the old days, its much easier to give up, to just pay for heating oil (in the example of firewood), or just even to get blocked and split wood delivered. We don’t have time or patience in our day to do the hard work and we don’t have many willing to help either. Though there are a good few who will if asked!

Life, many would even suggest, is better with hard labour and a willingness to work, and one reason is that you appreciate the down time FAR more after said good hard work.