The iPad as a workstation 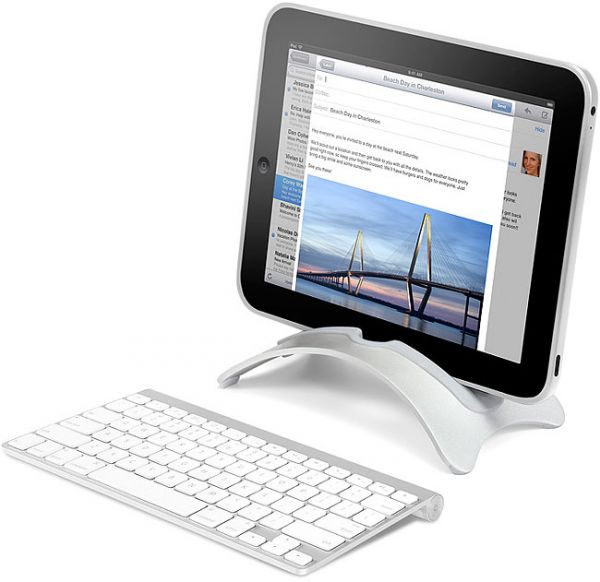 So I’ve been typing on my iPad a LOT recently, thanks to a nice little, and by that I mean BIG discussion on creation / evolution. Typing on the screen is ok, as I’ve stated before but prone to mistakes, most often by autocorrect oddly enough 😛

I have a bluetooth keyboard though, one like the one shown in the image (not my setup, just a random ipad workstation setup). So my ipad is in landscape mode, bluetooth right in front and I”ve been researching articles, typing out responses and generally googling things as fast as I can go (great thing about a debate is that it gives you great opportunity to learn more, to solidify opinions, consolidate knowledge and all…)

What have I found? In a pinch (and a zoom or two) the iPad works quite well as an email workstation or browser based workstation assuming whatever processes you need to do work with the software on the ipad. ie, you’re not too worried about sharing files around, uploading, and your browser is compatible with the sites you’re using and such. Not that any of this can’t be done on ipad but there is a complexity curve, beyond which the task is too tedious on the ipad. Example, uploading images to wordpress at this time would mean I would need to transfer a photo to the ipad, upload it with my ftp software, find the link from the media section in wordpress in the browser, copy the URL and paste into my blog (and manually type the HTML code to display it).

So not all processes are perfect but the hope is that iOS 5.x will allow more autonomy via wifi software updates, HOPEFULLY a more dedicated itunes, or should I say, a more standalone version of it that doesn’t rely on a ‘main frame’ for the podcasts. Longer story there :S

I also have a pastor friend (should out to Josh Singh!) who primarily uses it for work related activities, emails, research, sermon writing. He has the gen 1 doc stand for his gen 1 ipad and it seems to work for whatever he uses it. So the iPad as a workstation is indeed possible assuming you’re willing to compromise on some things, work around others and generally adjust some of your ingrained computer using experience expectations. Thats not all bad though because computers as we know them will indeed be a t hinge of the past, whether sooner or later so get used to adjusting your work habits. It only takes a little while to figure out how to get things done on a new system providing you give said new system a chance.

I can’t do everything yet on ipad but I’m getting real close (and I am holding onto my bluetooth keyboard, at least for the foreseeable future). Cant wait for the next few iterations. I might even be interested in tablets from other companies too if they can get something anywhere close to Apples ease of use and quality!

One thought on “The iPad as a workstation”