So first, just an observation and its amazing to me, but there are just a LOT of transient people in Ch’town. People visiting, new people, people going here, going there. I mention it because its not like living in Cannington (a farm type community) or Georgetown Ontario. Both are relatively stable places, you don’t see too many new faces, the cultural spectrum is stagnant and limited – not that thats a bad thing. I’m just seeing living in Charlottetown – ok, outside but close – and going to Calvary you see different faces every sunday. Visitors, immigrants to Canada / to the Island, vacationers, relatives, family etc. Its a different church life for sure, cultural shock in a way. You see how people react to newbies (once you’re on the inside – we were on the outside for a good while), and then we react in similar fashions to newbies, we being the long timers now (6 months :P)

Different way of life here that Islanders are well used to! Not like old farm country Ontario. 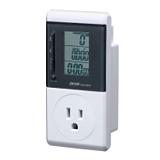 Blue Planet Energy Meter – from Canadian Tire – $24 or so

For electrical bills, I just purchased a Blue Planet Energy meter (see left). So you set your kwh cost – here its $0.155. Then you plug it in and watch the price meter go up. Granted, for most things its pretty slow. You need to leave it in for many hours, ideally 24 hours so you get a full – somewhat nominal – usage period. The longer you leave it going, the more accurate it is if you want to extrapolate costs over the month or year. Our monthly bill for Nov was $121 🙁   Methinks its mostly due to the furnace blower as when its cold, its on a lot. But we also have a well pump that is 2400 watts or something so when its on, its suckin power like theres no tomorrow.

I measured our TV / DVD / Wii corner, its about $2.80 a month, about $24 a year to run that. Granted… I have a timer on it, so during the night, it shuts off ALL power to the tv, dvd and Wii which would otherewise continually draw power. The TV of course is instant on – which means its always consuming power to keep it wound up, the Wii too sleeps during the night, still it uses power for that. Likely, without the timer, that cost would probably be twice as much.I currently have it plugged into the fridge, we’ll see how much that draws. Should be a LOT more. I’m also interested to see how much my home office chugs in the course of a work week – I’ve actually already added a timer onto things like my external screen, modem, router etc – no need for that in the middle of the night right?! So why bother letting it suck power.

You may say, well 24 buts or even 50 a year doesn’t sound like much. If you add that up though and consider I wasn’t using a timer, if I had 9 other things taking power like that does, that would be $500 a year right? (assuming without the timer it was $50 a year). Thats (500/12) $42 a month – how much is your monthly bill? Would you like  to cut your monthly bill down by $20 bucks? Oh ya!!  Saving electricity here and there with electronics or timers, like insulating, pays for itself quickly. With the timers, I would suggest they pay for themselves in less than 6 months. It all depends what you’re turning off with them. 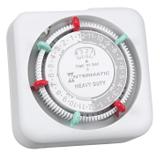 Stay tuned for more numbers as I collect them. Should be interesting. btw, timers like the one below are super useful, I have 3 of them running in the house already. You don’t need fancy digital ones either, they are far too complicated, the one here you just put the red and green tabs on the times you want the unit to switch on and off. No brainer! (from canadian tire too, about $15 – remember to get the 3 pronged ones, the two pronged ones are kinda useless for most things…

There ya go, does that open your eyes any little bit to the cost of electricity and how to save on your monthly bills,.. .or did you know that already??

2 thoughts on “Transients and Electrical Bills”