K, so iPod nano touch screen came out and I thought, huh… ok whats the point of a touchscreen on such a tiny device? It still just basically plays music. BUT, it has an analog clock face app on it. It allows you to listen to the radio, look at your photo album, play your itunes library, watch podcasts etc. Has multiple screens through which you can flick. But the one thing that Apple didn’t think of was to make a watch band for it. Luckily, other companies have seen the future with this unit. It actually becomes quite easily a nice little geeky calculator type watch (granted I don’t know if there is a calc app for it yet… surely there will be if they allow app creation on it) 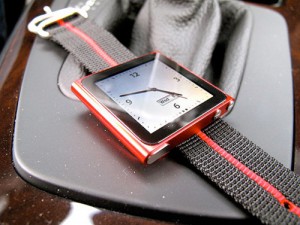 Now isn’t that the coolest? Touchscreen on your wrist. Next they should turn this guy into a phone, add bluetooth (for wireless headphones), an email checker (how cool would that be???!!!) and put a speaker into it too for alarms etc. Maybe it already has a speaker… who knows. We’re getting closer to that all-in-one device that lets you communicate, email, chat, video conference, surf, listen to audio AND tell the time.

Oh what an age we live in!

2 thoughts on “The Ultimate Calculator Watch”