Dragons and winged beasts are throughout  folklore and myth, most peoples and countries have dragons in their history.  It might be a picture of a dragon on the national flag, or statues or stories of courageous men slaying fire breathing reptiles. Did you know that reptiles never stop growing? So what if a reptile in a pre-flood world is able to live 200, 300, 500 years? Its going to be BIG, hence the dinosaurs, thats one of the only reasons there were dinosaurs back then, because they were able to live so long and grow so large.  We think dragons and fire breathing beasts are fairy tale. Nope, not at all, we just think we know stuff but we really don’t. See below an image of small dragons living today: 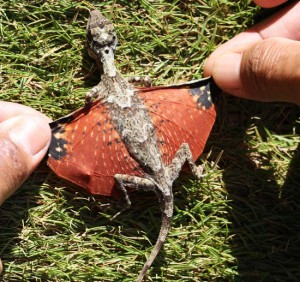 These are real animals with real capabilities. If they lived for 300 years, what do you think they would look like to us?? Look up the life span of reptiles and research it for yourself, if they were in an environment where they could live for 300 years, they would be the dragons and dinosaurs we only read about now.